Home Jesus The Women Who Followed Jesus Mary, Mother Of Jesus The Courtship and Marriage of Joseph and Mary

The Courtship and Marriage of Joseph and Mary 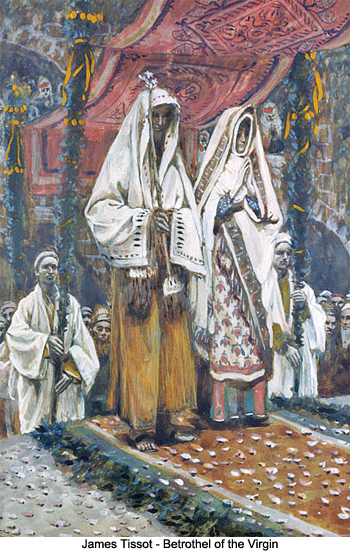 (122:5.8) When Joseph was a young man, he was employed by Mary's father in the work of building an addition to his house, and it was… when Mary brought Joseph a cup of water, during a noontime meal … the courtship of the pair who were destined to become the parents of Jesus really began.

Joseph and Mary were married, in accordance with Jewish custom, at Mary's home in the environs of Nazareth when Joseph was twenty-one years old. This marriage concluded a normal courtship of almost two years' duration. Shortly thereafter they moved into their new home in Nazareth , which had been built by Joseph with the assistance of two of his brothers. The house was located near the foot of the near-by elevated land which so charmingly overlooked the surrounding countryside. In this home, especially prepared, these young and expectant parents had thought to welcome the child of promise, little realizing that this momentous event of a universe was to transpire while they would be absent from home in Bethlehem of Judea.

(122:6.2) The home of Joseph and Mary was a one-room stone structure with a flat roof and an adjoining building for housing the animals. The furniture consisted of a low stone table, earthenware and stone dishes and pots, a loom, a lampstand, several small stools, and mats for sleeping on the stone floor. In the back yard, near the animal annex, was the shelter which covered the oven and the mill for grinding grain. It required two persons to operate this type of mill, one to grind and another to feed the grain. As a small boy Jesus often fed grain to this mill while his mother turned the grinder.