Jesus And Godiah – Jonah And The Whale 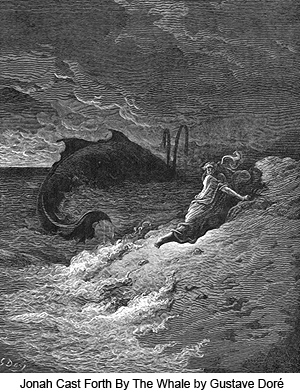 130:1.1 During their stay in Joppa, Jesus met Gadiah, a Philistine interpreter who worked for one Simon a tanner. Gonod's agents in Mesopotamia had transacted much business with this Simon; so Gonod and his son desired to pay him a visit on their way to Caesarea. While they tarried at Joppa, Jesus and Gadiah became warm friends. This young Philistine was a truth seeker. Jesus was a truth giver; he was the truth for that generation on Urantia. When a great truth seeker and a great truth giver meet, the result is a great and liberating enlightenment born of the experience of new truth.

130:1.2 One day after the evening meal Jesus and the young Philistine strolled down by the sea, and Gadiah, not knowing that this "scribe of Damascus" was so well versed in the Hebrew traditions, pointed out to Jesus the ship landing from which it was reputed that Jonah had embarked on his ill-fated voyage to Tarshish. And when he had concluded his remarks, he asked Jesus this question: "But do you suppose the big fish really did swallow Jonah?" Jesus perceived that this young man's life had been tremendously influenced by this tradition, and that its contemplation had impressed upon him the folly of trying to run away from duty; Jesus therefore said nothing that would suddenly destroy the foundations of Gadiah's present motivation for practical living. In answering this question, Jesus said: "My friend, we are all Jonahs with lives to live in accordance with the will of God, and at all times when we seek to escape the present duty of living by running away to far-off enticements, we thereby put ourselves in the immediate control of those influences which are not directed by the powers of truth and the forces of righteousness. The flight from duty is the sacrifice of truth. The escape from the service of light and life can only result in those distressing conflicts with the difficult whales of selfishness which lead eventually to darkness and death unless such God-forsaking Jonahs shall turn their hearts, even when in the very depths of despair, to seek after God and his goodness. And when such disheartened souls sincerely seek for God-hunger for truth and thirst for righteousness-there is nothing that can hold them in further captivity. No matter into what great depths they may have fallen, when they seek the light with a whole heart, the spirit of the Lord God of heaven will deliver them from their captivity; the evil circumstances of life will spew them out upon the dry land of fresh opportunities for renewed service and wiser living."

130:1.3 Gadiah was mightily moved by Jesus' teaching, and they talked long into the night by the seaside, and before they went to their lodgings, they prayed together and for each other. This was the same Gadiah who listened to the later preaching of Peter, became a profound believer in Jesus of Nazareth, and held a memorable argument with Peter one evening at the home of Dorcas. And Gadiah had very much to do with the final decision of Simon, the wealthy leather merchant, to embrace Christianity.

130:1.5 Jesus' last visit with Gadiah had to do with a discussion of good and evil. This young Philistine was much troubled by a feeling of injustice because of the presence of evil in the world alongside the good. He said: "How can God, if he is infinitely good, permit us to suffer the sorrows of evil; after all, who creates evil?" It was still believed by many in those days that God creates both good and evil, but Jesus never taught such error. In answering this question, Jesus said: "My brother, God is love; therefore he must be good, and his goodness is so great and real that it cannot contain the small and unreal things of evil. God is so positively good that there is absolutely no place in him for negative evil. Evil is the immature choosing and the unthinking misstep of those who are resistant to goodness, rejectful of beauty, and disloyal to truth. Evil is only the misadaptation of immaturity or the disruptive and distorting influence of ignorance. Evil is the inevitable darkness which follows upon the heels of the unwise rejection of light. Evil is that which is dark and untrue, and which, when consciously embraced and willfully endorsed, becomes sin.

130:1.6 "Your Father in heaven, by endowing you with the power to choose between truth and error, created the potential negative of the positive way of light and life; but such errors of evil are really nonexistent until such a time as an intelligent creature wills their existence by mischoosing the way of life. And then are such evils later exalted into sin by the knowing and deliberate choice of such a willful and rebellious creature. This is why our Father in heaven permits the good and the evil to go along together until the end of life, just as nature allows the wheat and the tares to grow side by side until the harvest." Gadiah was fully satisfied with Jesus' answer to his question after their subsequent discussion had made clear to his mind the real meaning of these momentous statements.

130:5.4 One thing happened on a visit to Fair Havens which Ganid never forgot; the memory of this episode always caused him to wish he might do something to change the caste system of his native India. A drunken degenerate was attacking a slave girl on the public highway. When Jesus saw the plight of the girl, he rushed forward and drew the maiden away from the assault of the madman. While the frightened child clung to him, he held the infuriated man at a safe distance by his powerful extended right arm until the poor fellow had exhausted himself beating the air with his angry blows. Ganid felt a strong impulse to help Jesus handle the affair, but his father forbade him. Though they could not speak the girl's language, she could understand their act of mercy and gave token of her heartfelt appreciation as they all three escorted her home. This was probably as near a personal encounter with his fellows as Jesus ever had throughout his entire life in the flesh. But he had a difficult task that evening trying to explain to Ganid why he did not smite the drunken man. Ganid thought this man should have been struck at least as many times as he had struck the girl.