More Parables By The Sea 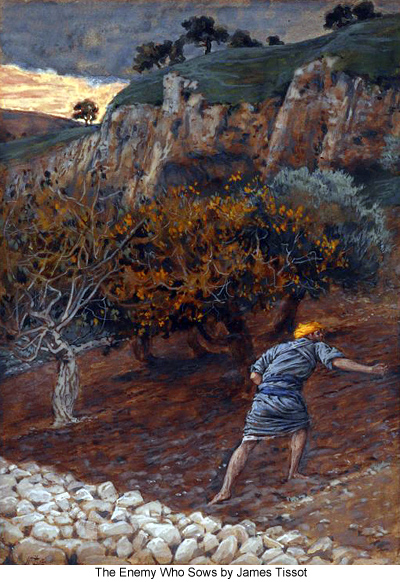 151:4.1 The next day Jesus again taught the people from the boat, saying: "The kingdom of heaven is like a man who sowed good seed in his field; but while he slept, his enemy came and sowed weeds among the wheat and hastened away. And so when the young blades sprang up and later were about to bring forth fruit, there appeared also the weeds. Then the servants of this householder came and said to him: `Sir, did you not sow good seed in your field? Whence then come these weeds?' And he replied to his servants, `An enemy has done this.' The servants then asked their master, `Would you have us go out and pluck up these weeds?' But he answered them and said: `No, lest while you are gathering them up, you uproot the wheat also. Rather let them both grow together until the time of the harvest, when I will say to the reapers, Gather up first the weeds and bind them in bundles to burn and then gather up the wheat to be stored in my barn.'"

151:4.2 After the people had asked a few questions, Jesus spoke another parable: "The kingdom of heaven is like a grain of mustard seed which a man sowed in his field. Now a mustard seed is the least of seeds, but when it is full grown, it becomes the greatest of all herbs and is like a tree so that the birds of heaven are able to come and rest in the branches thereof."

151:4.3 "The kingdom of heaven is also like leaven which a woman took and hid in three measures of meal, and in this way it came about that all of the meal was leavened."

151:4.4 "The kingdom of heaven is also like a treasure hidden in a field, which a man discovered. In his joy he went forth to sell all he had that he might have the money to buy the field."

151:4.5 "The kingdom of heaven is also like a merchant seeking goodly pearls; and having found one pearl of great price, he went out and sold everything he possessed that he might be able to buy the extraordinary pearl."

151:4.6 "Again, the kingdom of heaven is like a sweep net which was cast into the sea, and it gathered up every kind of fish. Now, when the net was filled, the fishermen drew it up on the beach, where they sat down and sorted out the fish, gathering the good into vessels while the bad they threw away."

151:4.7 Many other parables spoke Jesus to the multitudes. In fact, from this time forward he seldom taught the masses except by this means. After speaking to a public audience in parables, he would, during the evening classes, more fully and explicitly expound his teachings to the apostles and the evangelists.