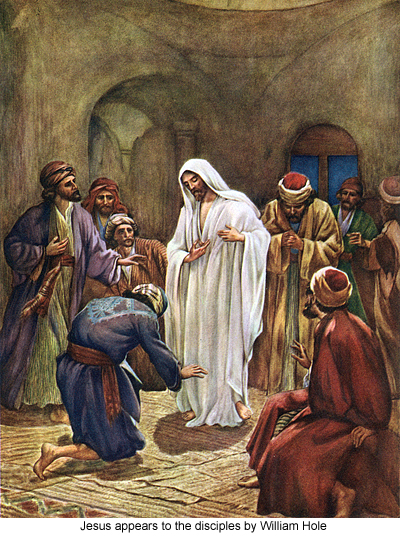 191:2.1 Shortly after nine o'clock that evening, after the departure of Cleopas and Jacob, while the Alpheus twins comforted Peter, and while Nathaniel remonstrated with Andrew, and as the ten apostles were there assembled in the upper chamber with all the doors bolted for fear of arrest, the Master, in morontia form, suddenly appeared in the midst of them, saying: "Peace be upon you. Why are you so frightened when I appear, as though you had seen a spirit? Did I not tell you about these things when I was present with you in the flesh? Did I not say to you that the chief priests and the rulers would deliver me up to be killed, that one of your own number would betray me, and that on the third day I would rise? Wherefore all your doubtings and all this discussion about the reports of the women, Cleopas and Jacob, and even Peter? How long will you doubt my words and refuse to believe my promises? And now that you actually see me, will you believe? Even now one of you is absent. When you are gathered together once more, and after all of you know of a certainty that the Son of Man has risen from the grave, go hence into Galilee. Have faith in God; have faith in one another; and so shall you enter into the new service of the kingdom of heaven. I will tarry in Jerusalem with you until you are ready to go into Galilee. My peace I leave with you."

191:2.2 When the morontia Jesus had spoken to them, he vanished in an instant from their sight. And they all fell on their faces, praising God and venerating their vanished Master. This was the Master's ninth morontia appearance.