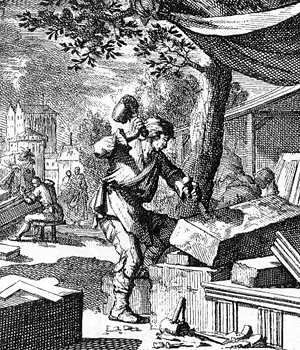 124:2.4 Perhaps his most unusual and outstanding trait was his unwillingness to fight for his rights. Since he was such a well-developed lad for his age, it seemed strange to his playfellows that he was disinclined to defend himself even from injustice or when subjected to personal abuse. As it happened, he did not suffer much on account of this trait because of the friendship of Jacob, a neighbor boy, who was one year older. He was the son of the stone mason, a business associate of Joseph. Jacob was a great admirer of Jesus and made it his business to see that no one was permitted to impose upon Jesus because of his aversion to physical combat. Several times older and uncouth youths attacked Jesus, relying upon his reputed docility, but they always suffered swift and certain retribution at the hands of his self-appointed champion and ever-ready defender, Jacob the stone mason's son.