Home Jesus Illustrated Stories The Trip To Bethlehem For The Census

The Trip To Bethlehem For The Census 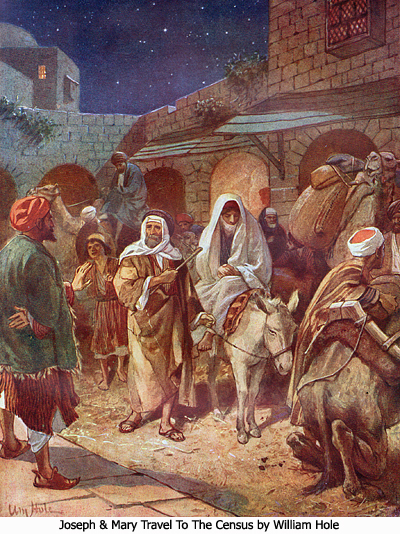 122:7.1 In the month of March, 8 B.C. (the month Joseph and Mary were married), Caesar Augustus decreed that all inhabitants of the Roman Empire should be numbered, that a census should be made which could be used for effecting better taxation. The Jews had always been greatly prejudiced against any attempt to "number the people," and this, in connection with the serious domestic difficulties of Herod, King of Judea, had conspired to cause the postponement of the taking of this census in the Jewish kingdom for one year. Throughout all the Roman Empire this census was registered in the year 8 B.C., except in the Palestinian kingdom of Herod, where it was taken in 7 B.C., one year later.

122:7.2 It was not necessary that Mary should go to Bethlehem for enrollment—Joseph was authorized to register for his family—but Mary, being an adventurous and aggressive person, insisted on accompanying him. She feared being left alone lest the child be born while Joseph was away, and again, Bethlehem being not far from the City of Judah, Mary foresaw a possible pleasurable visit with her kinswoman Elizabeth.

122:7.3 Joseph virtually forbade Mary to accompany him, but it was of no avail; when the food was packed for the trip of three or four days, she prepared double rations and made ready for the journey. But before they actually set forth, Joseph was reconciled to Mary's going along, and they cheerfully departed from Nazareth at the break of day.

122:7.4 Joseph and Mary were poor, and since they had only one beast of burden, Mary, being large with child, rode on the animal with the provisions while Joseph walked, leading the beast. The building and furnishing of a home had been a great drain on Joseph since he had also to contribute to the support of his parents, as his father had been recently disabled. And so this Jewish couple went forth from their humble home early on the morning of August 18, 7 B.C., on their journey to Bethlehem.

122:7.5 Their first day of travel carried them around the foothills of Mount Gilboa, where they camped for the night by the river Jordan and engaged in many speculations as to what sort of a son would be born to them, Joseph adhering to the concept of a spiritual teacher and Mary holding to the idea of a Jewish Messiah, a deliverer of the Hebrew nation. 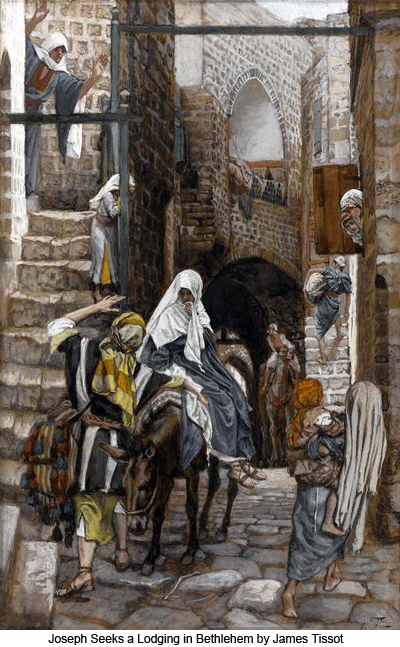 122:7.6 Bright and early the morning of August 19, Joseph and Mary were again on their way. They partook of their noontide meal at the foot of Mount Sartaba, overlooking the Jordan valley, and journeyed on, making Jericho for the night, where they stopped at an inn on the highway in the outskirts of the city. Following the evening meal and after much discussion concerning the oppressiveness of Roman rule, Herod, the census enrollment, and the comparative influence of Jerusalem and Alexandria as centers of Jewish learning and culture, the Nazareth travelers retired for the night's rest. Early in the morning of August 20 they resumed their journey, reaching Jerusalem before noon, visiting the temple, and going on to their destination, arriving at Bethlehem in midafternoon.

122:7.7 The inn was overcrowded, and Joseph accordingly sought lodgings with distant relatives, but every room in Bethlehem was filled to overflowing. On returning to the courtyard of the inn, he was informed that the caravan stables, hewn out of the side of the rock and situated just below the inn, had been cleared of animals and cleaned up for the reception of lodgers. Leaving the donkey in the courtyard, Joseph shouldered their bags of clothing and provisions and with Mary descended the stone steps to their lodgings below. They found themselves located in what had been a grain storage room to the front of the stalls and mangers. Tent curtains had been hung, and they counted themselves fortunate to have such comfortable quarters.

122:7.8 Joseph had thought to go out at once and enroll, but Mary was weary; she was considerably distressed and besought him to remain by her side, which he did.