The Tragic Surrender Of Pilate 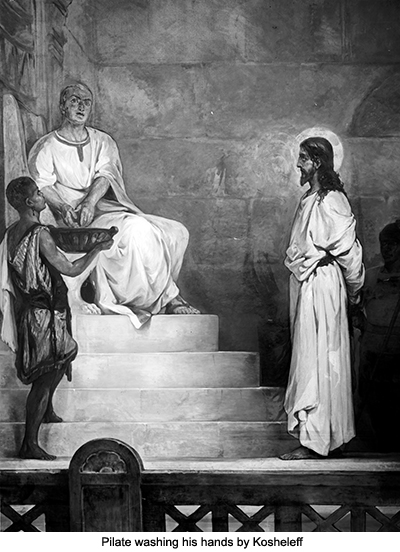 185:1.1 Here stood the Son of God incarnate as the Son of Man. He was arrested without indictment; accused without evidence; adjudged without witnesses; punished without a verdict; and now was soon to be condemned to die by an unjust judge who confessed that he could find no fault in him. If Pilate had thought to appeal to their patriotism by referring to Jesus as the "king of the Jews," he utterly failed. The Jews were not expecting any such a king. The declaration of the chief priests and the Sadducees," We have no king but Caesar," was a shock even to the unthinking populace, but it was too late now to save Jesus even had the mob dared to espouse the Master's cause.

185:8.2 Pilate was afraid of a tumult or a riot. He dared not risk having such a disturbance during Passover time in Jerusalem. He had recently received a reprimand from Caesar, and he would not risk another. The mob cheered when he ordered the release of Barabbas. Then he ordered a basin and some water, and there before the multitude he washed his hands, saying: "I am innocent of the blood of this man. You are determined that he shall die, but I have found no guilt in him. See you to it. The soldiers will lead him forth." And then the mob cheered and replied, "His blood be on us and on our children."