The Last Hour On The Cross - "It Is Finished" 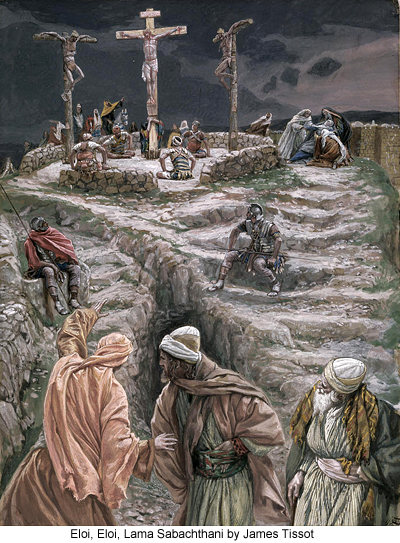 187:5.1 Although it was early in the season for such a phenomenon, shortly after twelve o'clock the sky darkened by reason of the fine sand in the air. The people of Jerusalem knew that this meant the coming of one of those hot-wind sandstorms from the Arabian desert. Before one o'clock the sky was so dark the sun was hid, and the remainder of the crowd hastened back to the city. When the Master gave up his life shortly after this hour, less than thirty people were present, only the thirteen Roman soldiers and a group of about fifteen believers. These believers were all women except two, Jude, Jesus' brother, and John Zebedee who returned to the scene just before the Master expired.

187:5.2 Shortly after one o'clock, amidst the increasing darkness of the fierce sandstorm, Jesus began to fail in human consciousness. His last words of mercy, forgiveness, and admonition had been spoken. His last wish—concerning the care of his mother —had been expressed. During this hour of approaching death the human mind of Jesus resorted to the repetition of many passages in the Hebrew scriptures, particularly the Psalms. The last conscious thought of the human Jesus was concerned with the repetition in his mind of a portion of the Book of Psalms now known as the twentieth, twenty-first, and twenty-second Psalms. While his lips would often move, he was too weak to utter the words as these passages, which he so well knew by heart, would pass through his mind. Only a few times did those standing by catch some utterance, such as, "I know the Lord will save his anointed," "Your hand shall find out all my enemies," and "My God, my God, why have you forsaken me?" Jesus did not for one moment entertain the slightest doubt that he had lived in accordance with the Father's will; and he never doubted that he was now laying down his life in the flesh in accordance with his Father's will. He did not feel that the Father had forsaken him; he was merely reciting in his vanishing consciousness many Scriptures, among them this twenty-second Psalm, which begins with "My God, my God, why have you forsaken me?" And this happened to be one of the three passages which were spoken with sufficient clearness to be heard by those standing by.

187:5.3 The last request which the mortal Jesus made of his fellows was about half past one o'clock when, a second time, he said, "I thirst," and the same captain of the guard again moistened his lips with the same sponge wet in the sour wine, in those days commonly called vinegar.

187:5.4 The sandstorm grew in intensity and the heavens increasingly darkened. Still the soldiers and the small group of believers stood by. The soldiers crouched near the cross, huddled together to protect themselves from the cutting sand. The mother of John and others watched from a distance where they were somewhat sheltered by an overhanging rock. When the Master finally breathed his last, there were present at the foot of his cross John Zebedee, his brother Jude, his sister Ruth, Mary Magdalene, and Rebecca, onetime of Sepphoris.

187:5.5 It was just before three o'clock when Jesus, with a loud voice, cried out, "It is finished! Father, into your hands I commend my spirit." And when he had thus spoken, he bowed his head and gave up the life struggle. When the Roman centurion saw how Jesus died, he smote his breast and said: "This was indeed a righteous man; truly he must have been a Son of God." And from that hour he began to believe in Jesus.

187:5.6 Jesus died royally—as he had lived. He freely admitted his kingship and remained master of the situation throughout the tragic day. He went willingly to his ignominious death, after he had provided for the safety of his chosen apostles. He wisely restrained Peter's trouble-making violence and provided that John might be near him right up to the end of his mortal existence. He revealed his true nature to the murderous Sanhedrin and reminded Pilate of the source of his sovereign authority as a Son of God. He started out to Golgotha bearing his own crossbeam and finished up his loving bestowal by handing over his spirit of mortal acquirement to the Paradise Father. After such a life—and at such a death—the Master could truly say, "It is finished."

187:5.7 Because this was the preparation day for both the Passover and the Sabbath, the Jews did not want these bodies to be exposed on Golgotha. Therefore they went before Pilate asking that the legs of these three men be broken, that they be dispatched, so that they could be taken down from their crosses and cast into the criminal burial pits before sundown. When Pilate heard this request, he forthwith sent three soldiers to break the legs and dispatch Jesus and the two brigands.

187:5.8 When these soldiers arrived at Golgotha, they did accordingly to the two thieves, but they found Jesus already dead, much to their surprise. However, in order to make sure of his death, one of the soldiers pierced his left side with his spear. Though it was common for the victims of crucifixion to linger alive upon the cross for even two or three days, the overwhelming emotional agony and the acute spiritual anguish of Jesus brought an end to his mortal life in the flesh in a little less than five and one-half hours.