Home Jesus Illustrated Stories The First Work Of The Twelve

The First Work Of The Twelve

138:8.1 After disposing of the fish catches of two weeks, Judas Iscariot, the one chosen to act as treasurer of the twelve, divided the apostolic funds into six equal portions, funds for the care of dependent families having been already provided. And then near the middle of August, in the year A.D. 26, they went forth two and two to the fields of work assigned by Andrew. The first two weeks Jesus went out with Andrew and Peter, the second two weeks with James and John, and so on with the other couples in the order of their choosing. In this way he was able to go out at least once with each couple before he called them together for the beginning of their public ministry.

138:8.2 Jesus taught them to preach the forgiveness of sin through faith in God without penance or sacrifice, and that the Father in heaven loves all his children with the same eternal love. He enjoined his apostles to refrain from discussing:

138:8.6 They had wonderful times throughout these five or six months during which they worked as fishermen every alternate two weeks, thereby earning enough money to support themselves in the field for each succeeding two weeks of missionary work for the kingdom.

138:8.7 The common people marveled at the teaching and ministry of Jesus and his apostles. The rabbis had long taught the Jews that the ignorant could not be pious or righteous. But Jesus' apostles were both pious and righteous; yet they were cheerfully ignorant of much of the learning of the rabbis and the wisdom of the world.

138:9.3 The apostles carried on their personal work in Capernaum, Bethsaida-Julias, Chorazin, Gerasa, Hippos, Magdala, Cana, Bethlehem of Galilee, Jotapata, Ramah, Safed, Gischala, Gadara, and Abila. Besides these towns they labored in many villages as well as in the countryside. By the end of this period the twelve had worked out fairly satisfactory plans for the care of their respective families. Most of the apostles were married, some had several children, but they had made such arrangements for the support of their home folks that, with some little assistance from the apostolic funds, they could devote their entire energies to the Master's work without having to worry about the financial welfare of their families. 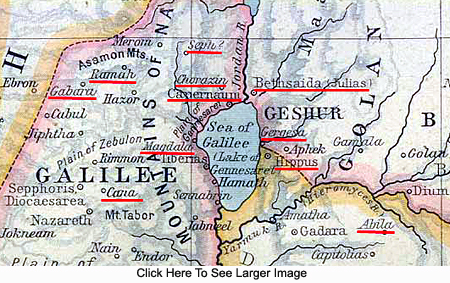