171:3.1 For more than two weeks Jesus and the twelve, followed by a crowd of several hundred disciples, journeyed about in southern Perea, visiting all of the towns wherein the seventy labored. Many gentiles lived in this region, and since few were going up to the Passover feast at Jerusalem, the messengers of the kingdom went right on with their work of teaching and preaching. 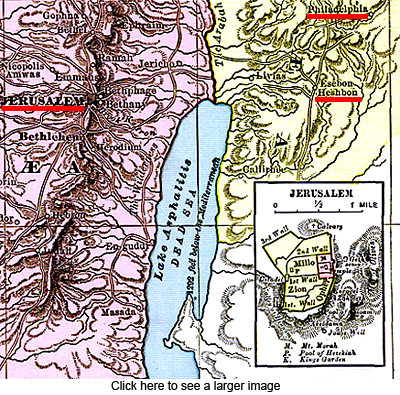 171:3.2 Jesus met Abner at Heshbon, and Andrew directed that the labors of the seventy should not be interrupted by the Passover feast; Jesus advised that the messengers should go forward with their work in complete disregard of what was about to happen at Jerusalem. He also counseled Abner to permit the women's corps, at least such as desired, to go to Jerusalem for the Passover. And this was the last time Abner ever saw Jesus in the flesh. His farewell to Abner was: "My son, I know you will be true to the kingdom, and I pray the Father to grant you wisdom that you may love and understand your brethren."

171:3.3 As they traveled from city to city, large numbers of their followers deserted to go on to Jerusalem so that, by the time Jesus started for the Passover, the number of those who followed along with him day by day had dwindled to less than two hundred.

171:3.4 The apostles understood that Jesus was going to Jerusalem for the Passover. They knew that the Sanhedrin had broadcast a message to all Israel that he had been condemned to die and directing that anyone knowing his whereabouts should inform the Sanhedrin; and yet, despite all this, they were not so alarmed as they had been when he had announced to them in that he was going to Bethany to see Lazarus. This change of attitude from that of intense fear to a state of hushed expectancy was mostly because of Lazarus's resurrection. They had reached the conclusion that Jesus might, in an emergency, assert his divine power and put to shame his enemies. This hope, coupled with their more profound and mature faith in the spiritual supremacy of their Master, accounted for the outward courage displayed by his immediate followers, who now made ready to follow him into Jerusalem in the very face of the open declaration of the Sanhedrin that he must die.

171:3.5 The majority of the apostles and many of his inner disciples did not believe it possible for Jesus to die; they, believing that he was "the resurrection and the life," regarded him as immortal and already triumphant over death.