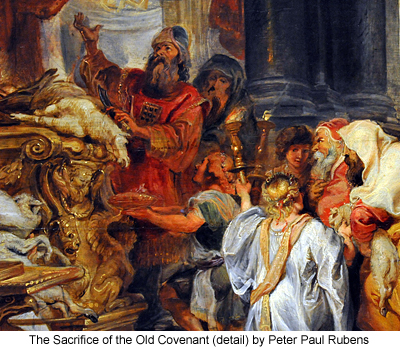 125:1.1 Everywhere Jesus went throughout the temple courts, he was shocked and sickened by the spirit of irreverence which he observed. He deemed the conduct of the temple throngs to be inconsistent with their presence in "his Father's house." But he received the shock of his young life when his father escorted him into the court of the gentiles with its noisy jargon, loud talking and cursing, mingled indiscriminately with the bleating of sheep and the babble of noises which betrayed the presence of the money-changers and the vendors of sacrificial animals and sundry other commercial commodities.

125:1.2 But most of all was his sense of propriety outraged by the sight of the frivolous courtesans parading about within this precinct of the temple, just such painted women as he had so recently seen when on a visit to Sepphoris. This profanation of the temple fully aroused all his youthful indignation, and he did not hesitate to express himself freely to Joseph.

125:1.3 Jesus admired the sentiment and service of the temple, but he was shocked by the spiritual ugliness which he beheld on the faces of so many of the unthinking worshipers.

125:1.4 They now passed down to the priests' court beneath the rock ledge in front of the temple, where the altar stood, to observe the killing of the droves of animals and the washing away of the blood from the hands of the officiating slaughter priests at the bronze fountain. The bloodstained pavement, the gory hands of the priests, and the sounds of the dying animals were more than this nature- loving lad could stand. The terrible sight sickened this boy of Nazareth; he clutched his father's arm and begged to be taken away. They walked back through the court of the gentiles, and even the coarse laughter and profane jesting which he there heard were a relief from the sights he had just beheld.

125:1.5 Joseph saw how his son had sickened at the sight of the temple rites and wisely led him around to view the "gate beautiful," the artistic gate made of Corinthian bronze. But Jesus had had enough for his first visit at the temple. They returned to the upper court for Mary and walked about in the open air and away from the crowds for an hour, viewing the Asmonean palace, the stately home of Herod, and the tower of the Roman guards. During this stroll Joseph explained to Jesus that only the inhabitants of Jerusalem were permitted to witness the daily sacrifices in the temple, and that the dwellers in Galilee came up only three times a year to participate in the temple worship: at the Passover, at the feast of Pentecost (seven weeks after Passover), and at the feast of tabernacles in October. These feasts were established by Moses. They then discussed the two later established feasts of the dedication and of Purim. Afterward they went to their lodgings and made ready for the celebration of the Passover. 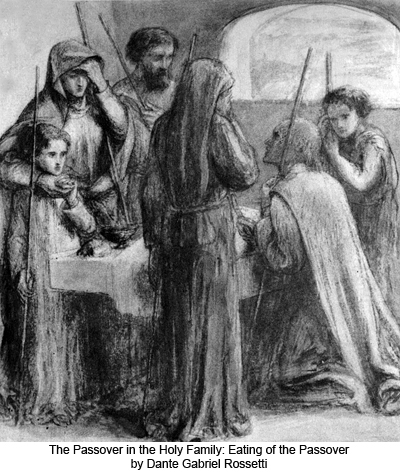