Jesus Has An Accident 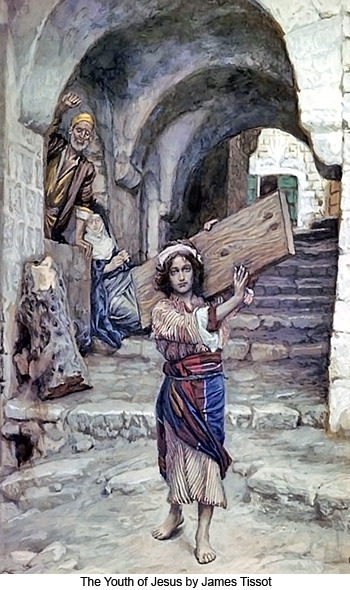 123:4.5 The only real accident Jesus had up to this time was a fall down the back-yard stone stairs which led up to the canvas-roofed bedroom. It happened during an unexpected July sandstorm from the east. The hot winds, carrying blasts of fine sand, usually blew during the rainy season, especially in March and April. It was extraordinary to have such a storm in July. When the storm came up, Jesus was on the housetop playing, as was his habit, for during much of the dry season this was his accustomed playroom. He was blinded by the sand when descending the stairs and fell. After this accident Joseph built a balustrade up both sides of the stairway.

123:4.6 There was no way in which this accident could have been prevented. It was not chargeable to neglect by the midway temporal guardians, one primary and one secondary midwayer having been assigned to the watchcare of the lad; neither was it chargeable to the guardian seraphim. It simply could not have been avoided. But this slight accident, occurring while Joseph was absent in Endor, caused such great anxiety to develop in Mary's mind that she unwisely tried to keep Jesus very close to her side for some months.

123:4.7 Material accidents, commonplace occurrences of a physical nature, are not arbitrarily interfered with by celestial personalities. Under ordinary circumstances only midway creatures can intervene in material conditions to safeguard the persons of men and women of destiny, and even in special situations these beings can so act only in obedience to the specific mandates of their superiors.

123:4.8 And this was but one of a number of such minor accidents which subsequently befell this inquisitive and adventurous youth. If you envisage the average childhood and youth of an aggressive boy, you will have a fairly good idea of the youthful career of Jesus, and you will be able to imagine just about how much anxiety he caused his parents, particularly his mother.