Jesus' First And Second Days In The Temple

125:4.1 In the meantime, Jesus had remained in the temple throughout the afternoon, listening to the discussions and enjoying the more quiet and decorous atmosphere, the great crowds of Passover week having about disappeared. At the conclusion of the afternoon discussions, in none of which Jesus participated, he betook himself to Bethany, arriving just as Simon's family made ready to partake of their evening meal. The three youngsters were overjoyed to greet Jesus, and he remained in Simon's house for the night. He visited very little during the evening, spending much of the time alone in the garden meditating.

125:4.2 Early next day Jesus was up and on his way to the temple. On the brow of Olivet he paused and wept over the sight his eyes beheld—a spiritually impoverished people, tradition bound and living under the surveillance of the Roman legions. Early forenoon found him in the temple with his mind made up to take part in the discussions. Meanwhile, Joseph and Mary also had arisen with the early dawn with the intention of retracing their steps to Jerusalem. First, they hastened to the house of their relatives, where they had lodged as a family during the Passover week, but inquiry elicited the fact that no one had seen Jesus. After searching all day and finding no trace of him, they returned to their relatives for the night. 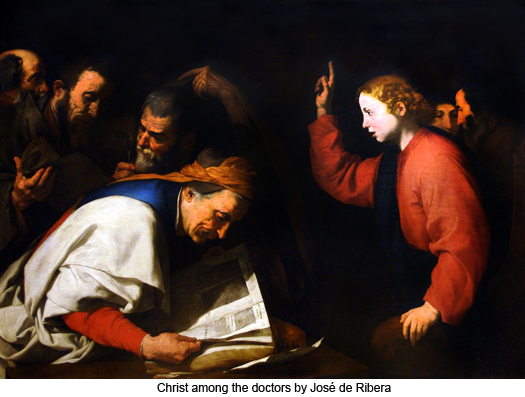 125:4.3 At the second conference Jesus had made bold to ask questions, and in a very amazing way he participated in the temple discussions but always in a manner consistent with his youth. Sometimes his pointed questions were somewhat embarrassing to the learned teachers of the Jewish law, but he evinced such a spirit of candid fairness, coupled with an evident hunger for knowledge, that the majority of the temple teachers were disposed to treat him with every consideration. But when he presumed to question the justice of putting to death a drunken gentile who had wandered outside the court of the gentiles and unwittingly entered the forbidden and reputedly sacred precincts of the temple, one of the more intolerant teachers grew impatient with the lad's implied criticisms and, glowering down upon him, asked how old he was. Jesus replied, "thirteen years lacking a trifle more than four months." "Then," rejoined the now irate teacher, "why are you here, since you are not of age as a son of the law?" And when Jesus explained that he had received consecration during the Passover, and that he was a finished student of the Nazareth schools, the teachers with one accord derisively replied, "We might have known; he is from Nazareth." But the leader insisted that Jesus was not to be blamed if the rulers of the synagogue at Nazareth had graduated him, technically, when he was twelve instead of thirteen; and notwithstanding that several of his detractors got up and left, it was ruled that the lad might continue undisturbed as a pupil of the temple discussions.

125:4.4 When this, his second day in the temple, was finished, again he went to Bethany for the night. And again he went out in the garden to meditate and pray. It was apparent that his mind was concerned with the contemplation of weighty problems.