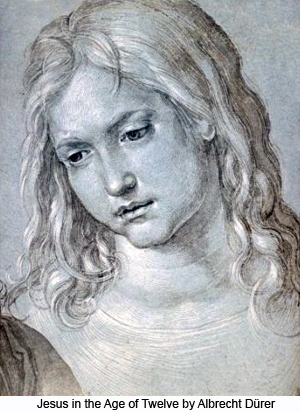 124:4.7 During his last year at school, when he was twelve years old, Jesus remonstrated with his father about the Jewish custom of touching the bit of parchment nailed upon the doorpost each time on going into, or coming out of, the house and then kissing the finger that touched the parchment. As a part of this ritual it was customary to say, "The Lord shall preserve our going out and our coming in, from this time forth and even forevermore." Joseph and Mary had repeatedly instructed Jesus as to the reasons for not making images or drawing pictures, explaining that such creations might be used for idolatrous purposes. Though Jesus failed fully to grasp their proscriptions against images and pictures, he possessed a high concept of consistency and therefore pointed out to his father the essentially idolatrous nature of this habitual obeisance to the doorpost parchment. And Joseph removed the parchment after Jesus had thus remonstrated with him.

124:4.8 As time passed, Jesus did much to modify their practice of religious forms, such as the family prayers and other customs. And it was possible to do many such things at Nazareth, for its synagogue was under the influence of a liberal school of rabbis, exemplified by the renowned Nazareth teacher, Jose.

124:4.9 Throughout this and the two following years Jesus suffered great mental distress as the result of his constant effort to adjust his personal views of religious practices and social amenities to the established beliefs of his parents. He was distraught by the conflict between the urge to be loyal to his own convictions and the conscientious admonition of dutiful submission to his parents; his supreme conflict was between two great commands which were uppermost in his youthful mind. The one was: "Be loyal to the dictates of your highest convictions of truth and righteousness." The other was: "Honor your father and mother, for they have given you life and the nurture thereof." However, he never shirked the responsibility of making the necessary daily adjustments between these realms of loyalty to one's personal convictions and duty toward one's family, and he achieved the satisfaction of effecting an increasingly harmonious blending of personal convictions and family obligations into a masterful concept of group solidarity based upon loyalty, fairness, tolerance, and love.