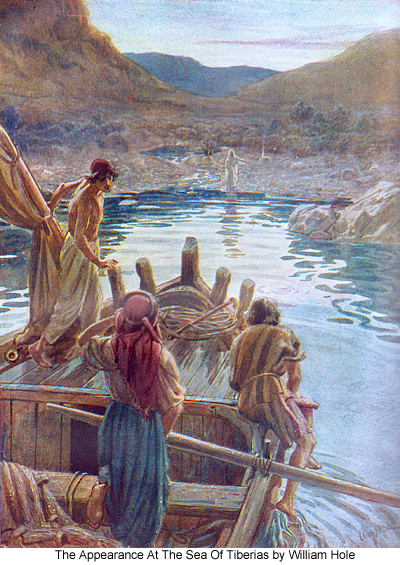 192:1.1 About six o'clock Friday morning, April 21, the morontia Master made his thirteenth appearance, the first in Galilee, to the ten apostles as their boat drew near the shore close to the usual landing place at Bethsaida.

192:1.2 After the apostles had spent the afternoon and early evening of Thursday in waiting at the Zebedee home, Simon Peter suggested that they go fishing. When Peter proposed the fishing trip, all of the apostles decided to go along. All night they toiled with the nets but caught no fish. They did not much mind the failure to make a catch, for they had many interesting experiences to talk over, things which had so recently happened to them at Jerusalem. But when daylight came, they decided to return to Bethsaida. As they neared the shore, they saw someone on the beach, near the boat landing, standing by a fire. At first they thought it was John Mark, who had come down to welcome them back with their catch, but as they drew nearer the shore, they saw they were mistaken—the man was too tall for John. It had occurred to none of them that the person on the shore was the Master. They did not altogether understand why Jesus wanted to meet with them amidst the scenes of their earlier associations and out in the open in contact with nature, far away from the shut-in environment of Jerusalem with its tragic associations of fear, betrayal, and death. He had told them that, if they would go into Galilee, he would meet them there, and he was about to fulfill that promise.

192:1.3 As they dropped anchor and prepared to enter the small boat for going ashore, the man on the beach called to them, "Lads, have you caught anything?" And when they answered, "No," he spoke again. "Cast the net on the right side of the boat, and you will find fish." While they did not know it was Jesus who had directed them, with one accord they cast in the net as they had been instructed, and immediately it was filled, so much so that they were hardly able to draw it up. Now, John Zebedee was quick of perception, and when he saw the heavy-laden net, he perceived that it was the Master who had spoken to them. When this thought came into his mind, he leaned over and whispered to Peter, "It is the Master." Peter was ever a man of thoughtless action and impetuous devotion; so when John whispered this in his ear, he quickly arose and cast himself into the water that he might the sooner reach the Master's side. His brethren came up close behind him, having come ashore in the small boat, hauling the net of fishes after them.

192:1.4 By this time John Mark was up and, seeing the apostles coming ashore with the heavy-laden net, ran down the beach to greet them; and when he saw eleven men instead of ten, he surmised that the unrecognized one was the risen Jesus, and as the astonished ten stood by in silence, the youth rushed up to the Master and, kneeling at his feet, said, "My Lord and my Master." And then Jesus spoke, not as he had in Jerusalem, when he greeted them with " Peace be upon you," but in commonplace tones he addressed John Mark: "Well, John, I am glad to see you again and in carefree Galilee, where we can have a good visit. Stay with us, John, and have breakfast."

192:1.5 As Jesus talked with the young man, the ten were so astonished and surprised that they neglected to haul the net of fish in upon the beach. Now spoke Jesus: "Bring in your fish and prepare some for breakfast. Already we have the fire and much bread."

192:1.6 While John Mark had paid homage to the Master, Peter had for a moment been shocked at the sight of the coals of fire glowing there on the beach; the scene reminded him so vividly of the midnight fire of charcoal in the courtyard of Annas, where he had disowned the Master, but he shook himself and, kneeling at the Master's feet, exclaimed, "My Lord and my Master!"

192:1.7 Peter then joined his comrades as they hauled in the net. When they had landed their catch, they counted the fish, and there were 153 large ones. And again was the mistake made of calling this another miraculous catch of fish. There was no miracle connected with this episode. It was merely an exercise of the Master's preknowledge. He knew the fish were there and accordingly directed the apostles where to cast the net.

192:1.8 Jesus spoke to them, saying: "Come now, all of you, to breakfast. Even the twins should sit down while I visit with you; John Mark will dress the fish." John Mark brought seven good-sized fish, which the Master put on the fire, and when they were cooked, the lad served them to the ten. Then Jesus broke the bread and handed it to John, who in turn served it to the hungry apostles. When they had all been served, Jesus bade John Mark sit down while he himself served the fish and the bread to the lad. And as they ate, Jesus visited with them and recounted their many experiences in Galilee and by this very lake.

192:1.9 This was the third time Jesus had manifested himself to the apostles as a group. When Jesus first addressed them, asking if they had any fish, they did not suspect who he was because it was a common experience for these fishermen on the Sea of Galilee, when they came ashore, to be thus accosted by the fish merchants of Tarichea, who were usually on hand to buy the fresh catches for the drying establishments.

192:1.10 Jesus visited with the ten apostles and John Mark for more than an hour, and then he walked up and down the beach, talking with them two and two—but not the same couples he had at first sent out together to teach. All eleven of the apostles had come down from Jerusalem together, but Simon Zelotes grew more and more despondent as they drew near Galilee, so that, when they reached Bethsaida, he forsook his brethren and returned to his home.

192:1.11 Before taking leave of them this morning, Jesus directed that two of the apostles should volunteer to go to Simon Zelotes and bring him back that very day. And Peter and Andrew did so.