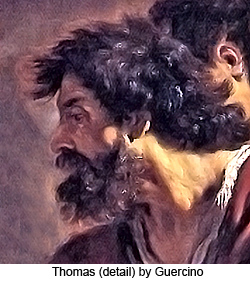 Thomas was the eighth apostle, and he was chosen by Philip. In later times he has become known as "doubting Thomas," but his fellow apostles hardly looked upon him as a chronic doubter. True, his was a logical, skeptical type of mind, but he had a form of courageous loyalty which forbade those who knew him intimately to regard him as a trifling skeptic.

When Thomas joined the apostles, he was twenty-nine years old, was married, and had four children. Formerly he had been a carpenter and stone mason, but latterly he had become a fisherman and resided at Tarichea, situated on the west bank of the Jordan where it flows out of the Sea of Galilee, and he was regarded as the leading citizen of this little village. He had little education, but he possessed a keen, reasoning mind and was the son of excellent parents, who lived at Tiberias. Thomas had the one truly analytical mind of the twelve; he was the real scientist of the apostolic group.

The early home life of Thomas had been unfortunate; his parents were not altogether happy in their married life, and this was reflected in Thomas's adult experience. He grew up having a very disagreeable and quarrelsome disposition. Even his wife was glad to see him join the apostles; she was relieved by the thought that her pessimistic husband would be away from home most of the time. Thomas also had a streak of suspicion which made it very difficult to get along peaceably with him. Peter was very much upset by Thomas at first, complaining to his brother, Andrew, that Thomas was "mean, ugly, and always suspicious." But the better his associates knew Thomas, the more they liked him. They found he was superbly honest and unflinchingly loyal. He was perfectly sincere and unquestionably truthful, but he was a natural-born faultfinder and had grown up to become a real pessimist. His analytical mind had become cursed with suspicion. He was rapidly losing faith in his fellow men when he became associated with the twelve and thus came in contact with the noble character of Jesus. This association with the Master began at once to transform Thomas's whole disposition and to effect great changes in his mental reactions to his fellow men.

Thomas's great strength was his superb analytical mind coupled with his unflinching courage—when he had once made up his mind. His great weakness was his suspicious doubting, which he never fully overcame throughout his whole lifetime in the flesh.

In the organization of the twelve Thomas was assigned to arrange and manage the itinerary, and he was an able director of the work and movements of the apostolic corps. He was a good executive, an excellent businessman, but he was handicapped by his many moods; he was one man one day and another man the next. He was inclined toward melancholic brooding when he joined the apostles, but contact with Jesus and the apostles largely cured him of this morbid introspection.

Jesus enjoyed Thomas very much and had many long, personal talks with him. His presence among the apostles was a great comfort to all honest doubters and encouraged many troubled minds to come into the kingdom, even if they could not wholly understand everything about the spiritual and philosophic phases of the teachings of Jesus. Thomas's membership in the twelve was a standing declaration that Jesus loved even honest doubters.

The other apostles held Jesus in reverence because of some special and outstanding trait of his replete personality, but Thomas revered his Master because of his superbly balanced character. Increasingly Thomas admired and honored one who was so lovingly merciful yet so inflexibly just and fair; so firm but never obstinate; so calm but never indifferent; so helpful and so sympathetic but never meddlesome or dictatorial; so strong but at the same time so gentle; so positive but never rough or rude; so tender but never vacillating; so pure and innocent but at the same time so virile, aggressive, and forceful; so truly courageous but never rash or foolhardy; such a lover of nature but so free from all tendency to revere nature; so humorous and so playful, but so free from levity and frivolity. It was this matchless symmetry of personality that so charmed Thomas. He probably enjoyed the highest intellectual understanding and personality appreciation of Jesus of any of the twelve.

In the councils of the twelve Thomas was always cautious, advocating a policy of safety first, but if his conservatism was voted down or overruled, he was always the first fearlessly to move out in execution of the program decided upon. Again and again would he stand out against some project as being foolhardy and presumptuous; he would debate to the bitter end, but when Andrew would put the proposition to a vote, and after the twelve would elect to do that which he had so strenuously opposed, Thomas was the first to say, "Let's go!" He was a good loser. He did not hold grudges nor nurse wounded feelings. Time and again did he oppose letting Jesus expose himself to danger, but when the Master would decide to take such risks, always was it Thomas who rallied the apostles with his courageous words, "Come on, comrades, let's go and die with him."

Thomas was in some respects like Philip; he also wanted "to be shown," but his outward expressions of doubt were based on entirely different intellectual operations. Thomas was analytical, not merely skeptical. As far as personal physical courage was concerned, he was one of the bravest among the twelve.

Thomas had some very bad days; he was blue and downcast at times. The loss of his twin sister when he was nine years old had occasioned him much youthful sorrow and had added to his temperamental problems of later life. When Thomas would become despondent, sometimes it was Nathaniel who helped him to recover, sometimes Peter, and not infrequently one of the Alpheus twins. When he was most depressed, unfortunately he always tried to avoid coming in direct contact with Jesus. But the Master knew all about this and had an understanding sympathy for his apostle when he was thus afflicted with depression and harassed by doubts.

Sometimes Thomas would get permission from Andrew to go off by himself for a day or two. But he soon learned that such a course was not wise; he early found that it was best, when he was downhearted, to stick close to his work and to remain near his associates. But no matter what happened in his emotional life, he kept right on being an apostle. When the time actually came to move forward, it was always Thomas who said, "Let's go!"

Thomas is the great example of a human being who has doubts, faces them, and wins. He had a great mind; he was no carping critic. He was a logical thinker; he was the acid test of Jesus and his fellow apostles. If Jesus and his work had not been genuine, it could not have held a man like Thomas from the start to the finish. He had a keen and sure sense of fact. At the first appearance of fraud or deception Thomas would have forsaken them all. Scientists may not fully understand all about Jesus and his work on earth, but there lived and worked with the Master and his human associates a man whose mind was that of a true scientist—Thomas Didymus—and he believed in Jesus of Nazareth.

Thomas had a trying time during the days of the trial and crucifixion. He was for a season in the depths of despair, but he rallied his courage, stuck to the apostles, and was present with them to welcome Jesus on the Sea of Galilee. For a while he succumbed to his doubting depression but eventually rallied his faith and courage. He gave wise counsel to the apostles after Pentecost and, when persecution scattered the believers, went to Cyprus, Crete, the North African coast, and Sicily, preaching the glad tidings of the kingdom and baptizing believers. And Thomas continued preaching and baptizing until he was apprehended by the agents of the Roman government and was put to death in Malta. Just a few weeks before his death he had begun the writing of the life and teachings of Jesus. ~ The Urantia Book, (139:8.1)