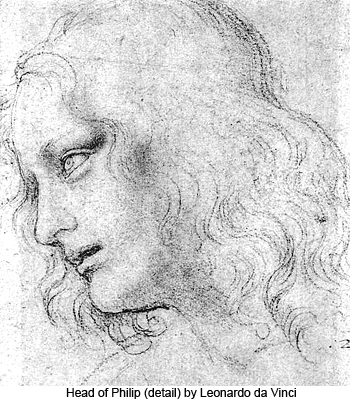 Philip was the fifth apostle to be chosen, being called when Jesus and his first four apostles were on their way from John's rendezvous on the Jordan to Cana of Galilee. Since he lived at Bethsaida, Philip had for some time known of Jesus, but it had not occurred to him that Jesus was a really great man until that day in the Jordan valley when he said, "Follow me." Philip was also somewhat influenced by the fact that Andrew, Peter, James, and John had accepted Jesus as the Deliverer.

Philip was twenty-seven years of age when he joined the apostles; he had recently been married, but he had no children at this time. The nickname which the apostles gave him signified "curiosity." Philip was always wanting to be shown. He never seemed to see very far into any proposition. He was not necessarily dull, but he lacked imagination. This lack of imagination was the great weakness of his character. He was a commonplace and matter-of-fact individual.

When the apostles were organized for service, Philip was made steward; it was his duty to see that they were at all times supplied with provisions. And he was a good steward. His strongest characteristic was his methodical thoroughness; he was both mathematical and systematic.

Philip came from a family of seven, three boys and four girls. He was next to the oldest, and after the resurrection he baptized his entire family into the kingdom. Philip's people were fisherfolk. His father was a very able man, a deep thinker, but his mother was of a very mediocre family. Philip was not a man who could be expected to do big things, but he was a man who could do little things in a big way, do them well and acceptably. Only a few times in four years did he fail to have food on hand to satisfy the needs of all. Even the many emergency demands attendant upon the life they lived seldom found him unprepared. The commissary department of the apostolic family was intelligently and efficiently managed.

The strong point about Philip was his methodical reliability; the weak point in his make-up was his utter lack of imagination, the absence of the ability to put two and two together to obtain four. He was mathematical in the abstract but not constructive in his imagination. He was almost entirely lacking in certain types of imagination. He was the typical everyday and commonplace average man. There were a great many such men and women among the multitudes who came to hear Jesus teach and preach, and they derived great comfort from observing one like themselves elevated to an honored position in the councils of the Master; they derived courage from the fact that one like themselves had already found a high place in the affairs of the kingdom. And Jesus learned much about the way some human minds function as he so patiently listened to Philip's foolish questions and so many times complied with his steward's request to "be shown."

The one quality about Jesus which Philip so continuously admired was the Master's unfailing generosity. Never could Philip find anything in Jesus which was small, niggardly, or stingy, and he worshiped this ever-present and unfailing liberality.

There was little about Philip's personality that was impressive. He was often spoken of as "Philip of Bethsaida, the town where Andrew and Peter live." He was almost without discerning vision; he was unable to grasp the dramatic possibilities of a given situation. He was not pessimistic; he was simply prosaic. He was also greatly lacking in spiritual insight. He would not hesitate to interrupt Jesus in the midst of one of the Master's most profound discourses to ask an apparently foolish question. But Jesus never reprimanded him for such thoughtlessness; he was patient with him and considerate of his inability to grasp the deeper meanings of the teaching. Jesus well knew that, if he once rebuked Philip for asking these annoying questions, he would not only wound this honest soul, but such a reprimand would so hurt Philip that he would never again feel free to ask questions. Jesus knew that on his worlds of space there were untold billions of similar slow-thinking mortals, and he wanted to encourage them all to look to him and always to feel free to come to him with their questions and problems. After all, Jesus was really more interested in Philip's foolish questions than in the sermon he might be preaching. Jesus was supremely interested in men, all kinds of men.

The apostolic steward was not a good public speaker, but he was a very persuasive and successful personal worker. He was not easily discouraged; he was a plodder and very tenacious in anything he undertook. He had that great and rare gift of saying, "Come." When his first convert, Nathaniel, wanted to argue about the merits and demerits of Jesus and Nazareth, Philip's effective reply was, "Come and see." He was not a dogmatic preacher who exhorted his hearers to "Go"—do this and do that. He met all situations as they arose in his work with "Come"—"come with me; I will show you the way." And that is always the effective technique in all forms and phases of teaching. Even parents may learn from Philip the better way of saying to their children not "Go do this and go do that," but rather, "Come with us while we show and share with you the better way."

The inability of Philip to adapt himself to a new situation was well shown when the Greeks came to him at Jerusalem, saying: "Sir, we desire to see Jesus." Now Philip would have said to any Jew asking such a question, "Come." But these men were foreigners, and Philip could remember no instructions from his superiors regarding such matters; so the only thing he could think to do was to consult the chief, Andrew, and then they both escorted the inquiring Greeks to Jesus. Likewise, when he went into Samaria preaching and baptizing believers, as he had been instructed by his Master, he refrained from laying hands on his converts in token of their having received the Spirit of Truth. This was done by Peter and John, who presently came down from Jerusalem to observe his work in behalf of the mother church.

Philip went on through the trying times of the Master's death, participated in the reorganization of the twelve, and was the first to go forth to win souls for the kingdom outside of the immediate Jewish ranks, being most successful in his work for the Samaritans and in all his subsequent labors in behalf of the gospel.

Philip's wife, who was an efficient member of the women's corps, became actively associated with her husband in his evangelistic work after their flight from the Jerusalem persecutions. His wife was a fearless woman. She stood at the foot of Philip's cross encouraging him to proclaim the glad tidings even to his murderers, and when his strength failed, she began the recital of the story of salvation by faith in Jesus and was silenced only when the irate Jews rushed upon her and stoned her to death. Their eldest daughter, Leah, continued their work, later on becoming the renowned prophetess of Hierapolis.

Philip, the onetime steward of the twelve, was a mighty man in the kingdom, winning souls wherever he went; and he was finally crucified for his faith and buried at Hierapolis. ~ The Urantia Book, (139:5.1)