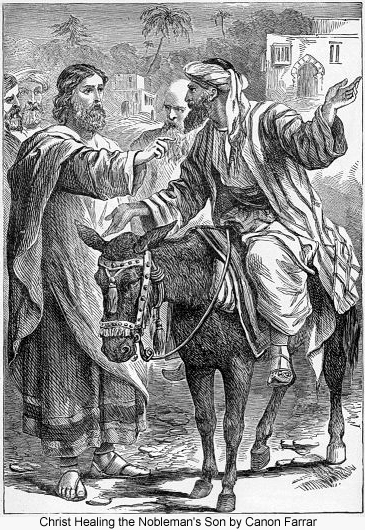 The apostolic party was greatly cheered when Jesus announced, "Tomorrow we go to Cana." They knew they would have a sympathetic hearing at Cana, for Jesus was well known there. They were doing well with their work of bringing people into the kingdom when, on the third day, there arrived in Cana a certain prominent citizen of Capernaum, Titus, who was a partial believer, and whose son was critically ill. He heard that Jesus was at Cana; so he hastened over to see him. The believers at Capernaum thought Jesus could heal any sickness. 146:5.2 When this nobleman had located Jesus in Cana, he besought him to hurry over to Capernaum and heal his afflicted son. While the apostles stood by in breathless expectancy, Jesus, looking at the father of the sick boy, said: "How long shall I bear with you? The power of God is in your midst, but except you see signs and behold wonders, you refuse to believe." But the nobleman pleaded with Jesus, saying: "My Lord, I do believe, but come ere my child perishes, for when I left him he was even then at the point of death." And when Jesus had bowed his head a moment in silent meditation, he suddenly spoke, "Return to your home; your son will live." Titus believed the word of Jesus and hastened back to Capernaum. And as he was returning, his servants came out to meet him, saying, "Rejoice, for your son is improved-he lives." Then Titus inquired of them at what hour the boy began to mend, and when the servants answered "yesterday about the seventh hour the fever left him," the father recalled that it was about that hour when Jesus had said, "Your son will live." And Titus henceforth believed with a whole heart, and all his family also believed. This son became a mighty minister of the kingdom and later yielded up his life with those who suffered in Rome. Though the entire household of Titus, their friends, and even the apostles regarded this episode as a miracle, it was not. At least this was not a miracle of curing physical disease. It was merely a case of preknowledge concerning the course of natural law, just such knowledge as Jesus frequently resorted to subsequent to his baptism.