The Urantia Book's Life of Jesus

Gabriel appeared to Mary about the middle of November, 8 B.C., while she was at work in her Nazareth home. Later on, after Mary knew without doubt that she was to become a mother, she persuaded Joseph to let her journey to the City of Judah, four miles west of Jerusalem, in the hills, to visit Elizabeth. Gabriel had informed each of these mothers-to-be of his appearance to the other. Naturally they were anxious to get together, compare experiences, and talk over the probable futures of their sons. Mary remained with her distant cousin for three weeks. Elizabeth did much to strengthen Mary's faith in the vision of Gabriel, so that she returned home more fully dedicated to the call to mother the child of destiny whom she was so soon to present to the world as a helpless babe, an average and normal infant of the realm.... Read the story here

A core part of The Urantia Book is the complete life of Jesus as never before told. At Truthbook, we bring the story to life with hundreds of images...

Urantia tells the life story and we Chronicle it by the week so you can easily enjoy it... Click to read Blog

"The evolving soul is not made divine by what it does, but by what it strives to do". Read more about your soul here. 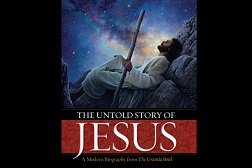 Buy The Untold Story of Jesus "Beautiful book! The beauty and truth of The Urantia Book comes alive in this wonderful depiction of the life of Christ." Click here to buy the book...

THE URANTIA BOOK ONLINE - LIFE OF JESUS AS NEVER TOLD BEFORE - URANTIA COMES TO LIFE!