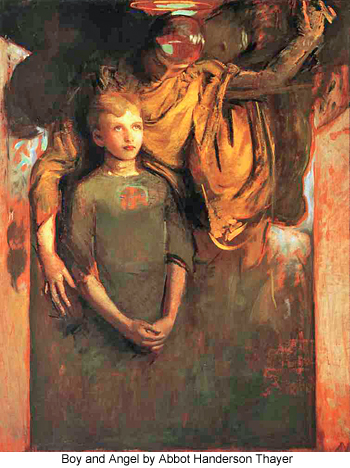 The teaching about guardian angels is not a myth; certain groups of human beings do actually have personal angels. It was in recognition of this that Jesus, in speaking of the children of the heavenly kingdom, said: "Take heed that you despise not one of these little ones, for I say to you, their angels do always behold the presence of the spirit of my Father. "

In the ministry to so-called normal beings, seraphic assignments are made in accordance with the human attainment of the circles of intellectuality and spirituality. You start out in your mind of mortal investment in the seventh circle and journey inward in the task of self-understanding, self-conquest, and self-mastery; and circle by circle you advance until (if natural death does not terminate your career and transfer your struggles to the mansion worlds) you reach the first or inner circle of relative contact and communion with the indwelling Adjuster.

Human beings in the initial or seventh circle have one guardian angel with one company of assisting cherubim assigned to the watchcare and custody of one thousand mortals. In the sixth circle, a seraphic pair with one company of cherubim is assigned to guide these ascending mortals in groups of five hundred. When the fifth circle is attained, human beings are grouped in companies of approximately one hundred, and a pair of guardian seraphim with a group of cherubim is placed in charge. Upon attainment of the fourth circle, mortal beings are assembled in groups of ten, and again charge is given to a pair of seraphim, assisted by one company of cherubim.

When a mortal mind breaks through the inertia of animal legacy and attains the third circle of human intellectuality and acquired spirituality, a personal angel (in reality two) will henceforth be wholly and exclusively devoted to this ascending mortal. And thus these human souls, in addition to the ever-present and increasingly efficient indwelling Thought Adjusters, receive the undivided assistance of these personal guardians of destiny in all their efforts to finish the third circle, traverse the second, and attain the first. ~ The Urantia Book, (113:1.1)

Having told you something of the ministry of seraphim during natural life, I will endeavor to inform you about the conduct of the guardians of destiny at the time of the mortal dissolution of their human associates. Upon your death, your records, identity specifications, and the morontia entity of the human soul —conjointly evolved by the ministry of mortal mind and the divine Adjuster—are faithfully conserved by the destiny guardian together with all other values related to your future existence, everything that constitutes you, the real you, except the identity of continuing existence represented by the departing Adjuster and the actuality of personality. The Urantia Book,

The instant the pilot light in the human mind disappears, the spirit luminosity which seraphim associate with the presence of the Adjuster, the attending angel reports in person to the commanding angels, successively, of the group, company, battalion, unit, legion, and host; and after being duly registered for the final adventure of time and space, such an angel receives certification by the planetary chief of seraphim for reporting to the Evening Star (or other lieutenant of Gabriel) in command of the seraphic army of this candidate for universe ascension. And upon being granted permission from the commander of this highest organizational unit, such a guardian of destiny proceeds to the first mansion world and there awaits the consciousizing of her former ward in the flesh.

In case the human soul fails of survival after having received the assignment of a personal angel, the attending seraphim must proceed to the headquarters of the local universe, there to witness to the complete records of her complement as previously reported. Next she goes before the tribunals of the archangels, to be absolved from blame in the matter of the survival failure of her subject; and then she goes back to the worlds, again to be assigned to another mortal of ascending potentiality or to some other division of seraphic ministry.

But angels minister to evolutionary creatures in many ways aside from the services of personal and group guardianship. Personal guardians whose subjects do not go immediately to the mansion worlds do not tarry there in idleness awaiting the dispensational roll calls of judgment; they are reassigned to numerous ministering missions throughout the universe.

The guardian seraphim is the custodial trustee of the survival values of mortal man's slumbering soul as the absent Adjuster is the identity of such an immortal universe being. When these two collaborate in the resurrection halls of mansonia in conjunction with the newly fabricated morontia form, there occurs the reassembly of the constituent factors of the personality of the mortal ascender.

The Adjuster will identify you; the guardian seraphim will repersonalize you and then re-present you to the faithful Monitor of your earth days.

And even so, when a planetary age ends, when those in the lower circles of mortal achievement are forgathered, it is their group guardians who reassemble them in the resurrection halls of the mansion spheres, even as your record tells: "And he shall send his angels with a great voice and shall gather together his elect from one end of the realm to another. "

The technique of justice demands that personal or group guardians shall respond to the dispensational roll call in behalf of all nonsurviving personalities. The Adjusters of such nonsurvivors do not return, and when the rolls are called, the seraphim respond, but the Adjusters make no answer. This constitutes the "resurrection of the unjust," in reality the formal recognition of the cessation of creature existence. This roll call of justice always immediately follows the roll call of mercy, the resurrection of the sleeping survivors. But these are matters which are of concern to none but the supreme and all-knowing Judges of survival values. Such problems of adjudication do not really concern us.

Group guardians may serve on a planet age after age and eventually become custodians of the slumbering souls of thousands upon thousands of sleeping survivors. They can so serve on many different worlds in a given system since the resurrection response occurs on the mansion worlds.

All personal and group guardians in the system of Satania who went astray in the Lucifer rebellion, notwithstanding that many sincerely repented of their folly, are to be detained on Jerusem until the final adjudication of the rebellion. Already have the Universal Censors arbitrarily taken from these disobedient and unfaithful guardians all aspects of their soul trusts and lodged these morontia realities for safekeeping in the custody of volunteer seconaphim. ~ The Urantia Book, (113:6.1)

Many of the faithful seraphic guardians of mortals are permitted to go through the ascendant career with their human wards, and many of these guardian angels, after becoming Father fused, join their subjects in taking the finaliter oath of eternity and forever accept the destiny of their mortal associates. Angels who pass through the ascending experience of mortal beings may share the destiny of human nature; they may equally and eternally be mustered into this Corps of the Finality. Large numbers of the adopted and glorified seraphim are attached to the various nonmortal finaliter corps. ~ The Urantia Book, (31:4.1)

The supreme choice of seraphim in the career of time is the post of guardian angel in order that they may attain the career of finality and be qualified for assignment to the eternal spheres of seraphic service. Such personal guides of the children of time are called guardians of destiny, signifying that they guard mortal creatures in the path of divine destiny, and that in so doing they are determining their own high destiny. ~ The Urantia Book, (39:8.5)

Guardians of destiny are drawn from the ranks of the more experienced angelic personalities of all orders of seraphim who have qualified for this service. All surviving mortals of Adjuster-fusion destiny have temporary guardians assigned, and these associates may become permanently attached when mortal survivors attain the requisite intellectual and spiritual development. Before mortal ascenders leave the mansion worlds, they all have permanent seraphic associates. This group of ministering spirits is discussed in connection with the Urantia narratives. ~ The Urantia Book, (39:8.6)

Mortals of series one inhabit the worlds of space during the earlier epochs of the evolution of mankind and embrace the most primitive types of human minds. On many worlds like pre-Adamic Urantia great numbers of the higher and more advanced types of primitive men acquire survival capacity but fail to attain Adjuster fusion. For ages upon ages, before man's ascent to the level of higher spiritual volition, the Adjusters occupy the minds of these struggling creatures during their short lives in the flesh, and the moment such will creatures are indwelt by Adjusters, the group guardian angels begin to function. While these mortals of the first series do not have personal guardians, they do have group custodians. ~ The Urantia Book, (40:5.6)

If you have a personal guardian of destiny and should fail of survival, that guardian angel must be adjudicated in order to receive vindication as to the faithful execution of her trust. ~ The Urantia Book, (108:5.10)

In the ministry of personal guardianship, the assignment of angels as destiny guardians, seraphim always volunteer their services. In the city of this visitation a certain mortal was recently admitted to the reserve corps of destiny, and since all such humans are personally attended by guardian angels, more than one hundred qualified seraphim sought the assignment. The planetary director selected twelve of the more experienced individuals and subsequently appointed the seraphim whom they selected as best adapted to guide this human being through his life journey. That is, they selected a certain pair of equally qualified seraphim; one of this seraphic pair will always be on duty. ~ The Urantia Book, (113:2.7)