How Did The Garden Of Eden Look? 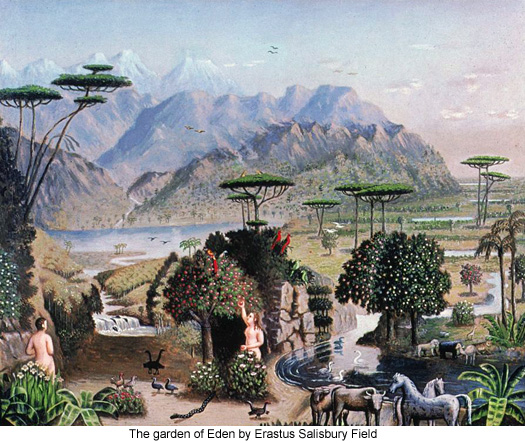 At the center of the Edenic peninsula was the exquisite stone temple of the Universal Father, the sacred shrine of the Garden. To the north the administrative headquarters was established; to the south were built the homes for the workers and their families; to the west was provided the allotment of ground for the proposed schools of the educational system of the expected Son, while in the "east of Eden" were built the domiciles intended for the promised Adam and Eve and their immediate offspring. The architectural plans for Eden provided homes and abundant land for one million human beings.

At the time of Adam's arrival, though the Garden was only one-fourth finished, it had thousands of miles of irrigation ditches and more than twelve thousand miles of paved paths and roads. There were a trifle over five thousand brick buildings in the various sectors, and the trees and plants were almost beyond number. Seven was the largest number of houses composing any one cluster in the park. And though the structures of the Garden were simple, they were most artistic. The roads and paths were well built, and the landscaping was exquisite.

The sanitary arrangements of the Garden were far in advance of anything that had been attempted theretofore on earth. The drinking water of Eden was kept wholesome by the strict observance of the sanitary regulations designed to conserve its purity. During these early times much trouble came about from neglect of these rules, but Van gradually impressed upon his associates the importance of allowing nothing to fall into the water supply of the Garden.

Before the later establishment of a sewage-disposal system the Edenites practiced the scrupulous burial of all waste or decomposing material. Amadon's inspectors made their rounds each day in search for possible causes of sickness. Humanity did not again awaken to the importance of the prevention of human diseases until the later times of the nineteenth and twentieth centuries. Before the disruption of the Adamic regime a covered brick-conduit disposal system had been constructed which ran beneath the walls and emptied into the river of Eden almost a mile beyond the outer or lesser wall of the Garden.

By the time of Adam's arrival most of the plants of that section of the world were growing in Eden. Already had many of the fruits, cereals, and nuts been greatly improved. Many modern vegetables and cereals were first cultivated here, but scores of varieties of food plants were subsequently lost to the world.

A Gem of Beauty

About five per cent of the Garden was under high artificial cultivation, fifteen per cent partially cultivated, the remainder being left in a more or less natural state pending the arrival of Adam, it being thought best to finish the park in accordance with his ideas.

And so was the Garden of Eden made ready for the reception of the promised Adam and his consort. And this Garden would have done honor to a world under perfected administration and normal control. Adam and Eve were well pleased with the general plan of Eden, though they made many changes in the furnishings of their own personal dwelling.

Although the work of embellishment was hardly finished at the time of Adam's arrival, the place was already a gem of botanic beauty; and during the early days of his sojourn in Eden the whole Garden took on new form and assumed new proportions of beauty and grandeur. Never before this time nor after has earth harbored such a beautiful and replete exhibition of horticulture and agriculture.