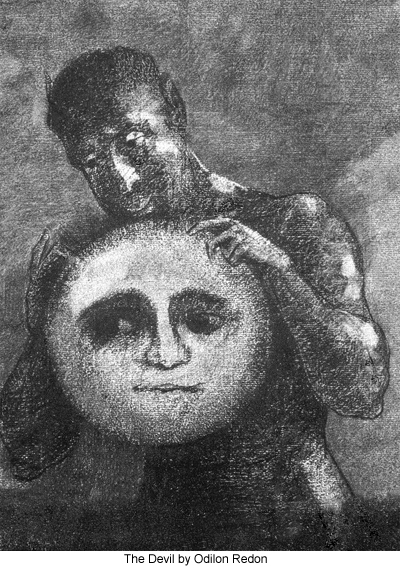 "The devil" is a term which is used on our planet to designate any number of evil influences - among them, Satan and Lucifer. The Urantia Book fully explains who the devil actually is, and also fully explores the role which this once-high being of celestial origin played - and still plays - in the problems of our spiritual evolvement on Urantia.

Caligastia was the very first divine revelation of epochal significance to visit our planet - 500,000 years ago. He was known as Planetary Prince of Urantia, a designation that now belongs to Christ Michael of Nebadon, otherwise known as Jesus of Nazareth. His enormous transgression consisted in his betrayal of trust as spiritual leader of our planet in its earliest days of evolution. His agreement to join with Lucifer and Satan in the Rebellion which bears Lucifer's name - a rebellion which resulted in the"War in Heaven" - still today, affects our planet in significant ways. The immediate outcome of Caligastia's betrayal was the quarantine of our planet from the celestial circuits, a situation which still prevails to this day, and which is the source of continuing confusion regarding God and other spiritual realities.

For the most complete story on Caligastia, please see Paper 66,The Planetary Prince of Urantia and Paper 67,The Planetary Rebellion

The doctrine of a personal devil on Urantia, though it had some foundation in the planetary presence of the traitorous and iniquitous Caligastia, was nevertheless wholly fictitious in its teachings that such a 'devil' could influence the normal human mind against its free and natural choosing. Even before Michael's bestowal on Urantia, neither Caligastia nor Daligastia was ever able to oppress mortals or to coerce any normal individual into doing anything against the human will. The free will of man is supreme in moral affairs; even the indwelling Thought Adjuster refuses to compel man to think a single thought or to perform a single act against the choosing of man's own will. " ~ The Urantia Book, (66:8.6)

The "devil" is none other than Caligastia, the deposed Planetary Prince of Urantia and a Son of the secondary order of Lanonandeks. At the time Michael was on Urantia in the flesh, Lucifer, Satan, and Caligastia were leagued together to effect the miscarriage of his bestowal mission. But they signally failed. ~ The Urantia Book, (53:1.4)

Caligastia was recognized by the Son of Man as the technical Prince of Urantia up to near the time of his death. Said Jesus: "Now is the judgment of this world; now shall the prince of this world be cast down." And then still nearer the completion of his lifework he announced, "The prince of this world is judged." And it is this same dethroned and discredited Prince who was once termed "God of Urantia."

The last act of Michael before leaving Urantia was to offer mercy to Caligastia and Daligastia, but they spurned his tender proffer. Caligastia, your apostate Planetary Prince, is still free on Urantia to prosecute his nefarious designs, but he has absolutely no power to enter the minds of men, neither can he draw near to their souls to tempt or corrupt them unless they really desire to be cursed with his wicked presence.

Before the bestowal of Michael these rulers of darkness sought to maintain their authority on Urantia, and they persistently withstood the minor and subordinate celestial personalities. But since the day of Pentecost this traitorous Caligastia and his equally contemptible associate, Daligastia, are servile before the divine majesty of the Paradise Thought Adjusters and the protective Spirit of Truth, the spirit of Michael, which has been poured out upon all flesh.

But even so, no fallen spirit ever did have the power to invade the minds or to harass the souls of the children of God. Neither Satan nor Caligastia could ever touch or approach the faith sons of God; faith is an effective armor against sin and iniquity. It is true: "He who is born of God keeps himself, and the wicked one touches him not."

In general, when weak and dissolute mortals are supposed to be under the influence of devils and demons, they are merely being dominated by their own inherent and debased tendencies, being led away by their own natural propensities. The devil has been given a great deal of credit for evil which does not belong to him. Caligastia has been comparatively impotent since the cross of Christ. ~ The Urantia Book, (53:8.5)

Jesus had endured the great temptation of his mortal bestowal before his baptism when he had been wet with the dews of Mount Hermon for six weeks. There on Mount Hermon, as an unaided mortal of the realm, he had met and defeated the Urantia pretender, Caligastia, the prince of this world. That eventful day, on the universe records, Jesus of Nazareth had become the Planetary Prince of Urantia. And this Prince of Urantia, so soon to be proclaimed supreme Sovereign of Nebadon, now went into forty days of retirement to formulate the plans and determine upon the technique of proclaiming the new kingdom of God in the hearts of men. ~ The Urantia Book, (136:3.1)

Then Jesus continued to speak: "Let me assure you that victory shall eventually crown our united efforts to enlighten the world and liberate mankind. The old order is bringing itself to judgment; the Prince of this world I have cast down; and all men shall become free by the light of the spirit which I will pour out upon all flesh after I have ascended to my Father in heaven." ~Jesus, The Urantia Book, (174:5.12)

"And when the kingdom shall have come to its full fruition, be assured that the Father in heaven will not fail to visit you with an enlarged revelation of truth and an enhanced demonstration of righteousness, even as he has already bestowed upon this world him who became the prince of darkness, and then Adam, who was followed by Melchizedek, and in these days, the Son of Man. And so will my Father continue to manifest his mercy and show forth his love, even to this dark and evil world." ~ Jesus, The Urantia Book, (176:2.3)

The Master knew he had revealed the Father's love on earth and had shown forth his mercy to mankind, and that he had completed that for which he came into the world, even to the receiving of all power and authority in heaven and on earth. Likewise, he knew Judas Iscariot had fully made up his mind to deliver him that night into the hands of his enemies. He fully realized that this traitorous betrayal was the work of Judas, but that it also pleased Lucifer, Satan, and Caligastia the prince of darkness. ~ The Urantia Book, (179:2.3)