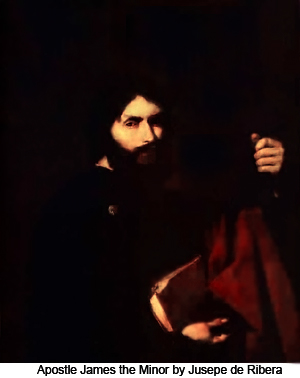 James and Judas the sons of Alpheus, the twin fishermen living near Kheresa, were the ninth and tenth apostles and were chosen by James and John Zebedee. They were twenty-six years old and married, James having three children, Judas two.

There is not much to be said about these two commonplace fisherfolk. They loved their Master and Jesus loved them, but they never interrupted his discourses with questions. They understood very little about the philosophical discussions or the theological debates of their fellow apostles, but they rejoiced to find themselves numbered among such a group of mighty men. These two men were almost identical in personal appearance, mental characteristics, and extent of spiritual perception. What may be said of one should be recorded of the other.

Andrew assigned them to the work of policing the multitudes. They were the chief ushers of the preaching hours and, in fact, the general servants and errand boys of the twelve. They helped Philip with the supplies, they carried money to the families for Nathaniel, and always were they ready to lend a helping hand to any one of the apostles.

The multitudes of the common people were greatly encouraged to find two like themselves honored with places among the apostles. By their very acceptance as apostles these mediocre twins were the means of bringing a host of faint-hearted believers into the kingdom. And, too, the common people took more kindly to the idea of being directed and managed by official ushers who were very much like themselves.

James and Judas, who were also called Thaddeus and Lebbeus, had neither strong points nor weak points. The nicknames given them by the disciples were good-natured designations of mediocrity. They were "the least of all the apostles" ; they knew it and felt cheerful about it.

James Alpheus especially loved Jesus because of the Master's simplicity. These twins could not comprehend the mind of Jesus, but they did grasp the sympathetic bond between themselves and the heart of their Master. Their minds were not of a high order; they might even reverently be called stupid, but they had a real experience in their spiritual natures. They believed in Jesus; they were sons of God and fellows of the kingdom. 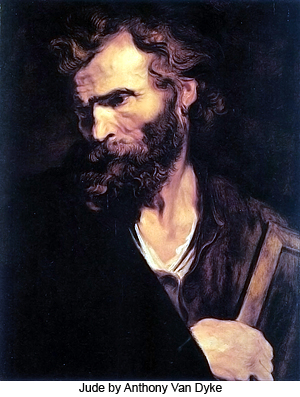 Judas Alpheus was drawn toward Jesus because of the Master's unostentatious humility. Such humility linked with such personal dignity made a great appeal to Judas. The fact that Jesus would always enjoin silence regarding his unusual acts made a great impression on this simple child of nature.

The twins were good-natured, simple-minded helpers, and everybody loved them. Jesus welcomed these young men of one talent to positions of honor on his personal staff in the kingdom because there are untold millions of other such simple and fear-ridden souls on the worlds of space whom he likewise wishes to welcome into active and believing fellowship with himself and his outpoured Spirit of Truth. Jesus does not look down upon littleness, only upon evil and sin. James and Judas were little, but they were also faithful. They were simple and ignorant, but they were also big-hearted, kind, and generous.

And how gratefully proud were these humble men on that day when the Master refused to accept a certain rich man as an evangelist unless he would sell his goods and help the poor. When the people heard this and beheld the twins among his counselors, they knew of a certainty that Jesus was no respecter of persons. But only a divine institution—the kingdom of heaven —could ever have been built upon such a mediocre human foundation!

Only once or twice in all their association with Jesus did the twins venture to ask questions in public. Judas was once intrigued into asking Jesus a question when the Master had talked about revealing himself openly to the world. He felt a little disappointed that there were to be no more secrets among the twelve, and he made bold to ask: "But, Master, when you do thus declare yourself to the world, how will you favor us with special manifestations of your goodness?"

The twins served faithfully until the end, until the dark days of trial, crucifixion, and despair. They never lost their heart faith in Jesus, and (save John) they were the first to believe in his resurrection. But they could not comprehend the establishment of the kingdom. Soon after their Master was crucified, they returned to their families and nets; their work was done. They had not the ability to go on in the more complex battles of the kingdom. But they lived and died conscious of having been honored and blessed with four years of close and personal association with a Son of God, the sovereign maker of a universe. ~ The Urantia Book, (139:9.1)