Parable Of The Good Samaritan 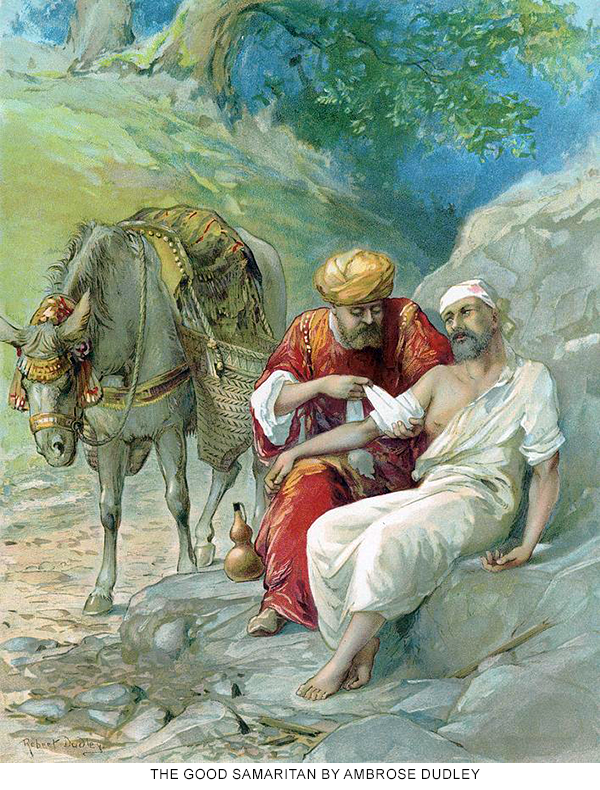 That evening a considerable company gathered about Jesus and the two apostles to ask questions, many of which the apostles answered, while others the Master discussed. In the course of the evening a certain lawyer, seeking to entangle Jesus in a compromising disputation, said: "Teacher, I would like to ask you just what I should do to inherit eternal life?" Jesus answered, "What is written in the law and the prophets; how do you read the Scripture?" The lawyer, knowing the teachings of both Jesus and the Pharisees, answered: "To love the Lord God with all your heart, soul, mind, and strength, and your neighbor as yourself." Then said Jesus: "You have answered right; this, if you really do, will lead to life everlasting."

But the lawyer was not wholly sincere in asking this question, and desiring to justify himself while also hoping to embarrass Jesus, he ventured to ask still another question. Drawing a little closer to the Master, he said, "But, Teacher, I should like you to tell me just who is my neighbor?" The lawyer asked this question hoping to entrap Jesus into making some statement that would contravene the Jewish law which defined one's neighbor as "the children of one's people." The Jews looked upon all others as "gentile dogs." This lawyer was somewhat familiar with Jesus' teachings and therefore well knew that the Master thought differently; thus he hoped to lead him into saying something which could be construed as an attack upon the sacred law.

But Jesus discerned the lawyer's motive, and instead of falling into the trap, he proceeded to tell his hearers a story, a story which would be fully appreciated by any Jericho audience. Said Jesus: "A certain man was going down from Jerusalem to Jericho, and he fell into the hands of cruel brigands, who robbed him, stripped him and beat him, and departing, left him half dead. Very soon, by chance, a certain priest was going down that way, and when he came upon the wounded man, seeing his sorry plight, he passed by on the other side of the road. And in like manner a Levite also, when he came along and saw the man, passed by on the other side. Now, about this time, a certain Samaritan, as he journeyed down to Jericho, came across this wounded man; and when he saw how he had been robbed and beaten, he was moved with compassion, and going over to him, he bound up his wounds, pouring on oil and wine, and setting the man upon his own beast, brought him here to the inn and took care of him. And on the morrow he took out some money and, giving it to the host, said: `Take good care of my friend, and if the expense is more, when I come back again, I will repay you.' Now let me ask you: Which of these three turned out to be the neighbor of him who fell among the robbers?" And when the lawyer perceived that he had fallen into his own snare, he answered, "He who showed mercy on him." And Jesus said, "Go and do likewise."

The lawyer answered, "He who showed mercy," that he might refrain from even speaking that odious word, Samaritan. The lawyer was forced to give the very answer to the question, "Who is my neighbor?" which Jesus wished given, and which, if Jesus had so stated, would have directly involved him in the charge of heresy. Jesus not only confounded the dishonest lawyer, but he told his hearers a story which was at the same time a beautiful admonition to all his followers and a stunning rebuke to all Jews regarding their attitude toward the Samaritans. And this story has continued to promote brotherly love among all who have subsequently believed the gospel of Jesus.