John the Baptist Begins to Preach And Baptize 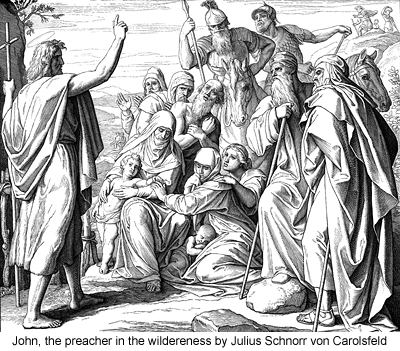 Early in the month of March, A.D. 25, John journeyed around the western coast of the Dead Sea and up the river Jordan to opposite Jericho, the ancient ford over which Joshua and the children of Israel passed when they first entered the promised land; and crossing over to the other side of the river, he established himself near the entrance to the ford and began to preach to the people who passed by on their way back and forth across the river. This was the most frequented of all the Jordan crossings.

It was apparent to all who heard John that he was more than a preacher. The great majority of those who listened to this strange man who had come up from the Judean wilderness went away believing that they had heard the voice of a prophet. No wonder the souls of these weary and expectant Jews were deeply stirred by such a phenomenon. Never in all Jewish history had the devout children of Abraham so longed for the "consolation of Israel" or more ardently anticipated "the restoration of the kingdom." Never in all Jewish history could John's message, "the kingdom of heaven is at hand," have made such a deep and universal appeal as at the very time he so mysteriously appeared on the bank of this southern crossing of the Jordan.

He came from the herdsmen, like Amos. He was dressed like Elijah of old, and he thundered his admonitions and poured forth his warnings in the "spirit and power of Elijah." It is not surprising that this strange preacher created a mighty stir throughout all Palestine as the travelers carried abroad the news of his preaching along the Jordan.

There was still another and a new feature about the work of this Nazarite preacher: He baptized every one of his believers in the Jordan "for the remission of sins." Although baptism was not a new ceremony among the Jews, they had never seen it employed as John now made use of it. It had long been the practice thus to baptize the gentile proselytes into the fellowship of the outer court of the temple, but never had the Jews themselves been asked to submit to the baptism of repentance. Only fifteen months intervened between the time John began to preach and baptize and his arrest and imprisonment at the instigation of Herod Antipas, but in this short time he baptized considerably over one hundred thousand penitents.

John preached four months at Bethany ford before starting north up the Jordan. Tens of thousands of listeners, some curious but many earnest and serious, came to hear him from all parts of Judea, Perea, and Samaria. Even a few came from Galilee.

In May of this year, while he still lingered at Bethany ford, the priests and Levites sent a delegation out to inquire of John whether he claimed to be the Messiah, and by whose authority he preached. John answered these questioners by saying: "Go tell your masters that you have heard `the voice of one crying in the wilderness,' as spoken by the prophet, saying, `make ready the way of the Lord, make straight a highway for our God. Every valley shall be filled, and every mountain and hill shall be brought low; the uneven ground shall become a plain, while the rough places shall become a smooth valley; and all flesh shall see the salvation of God.'" 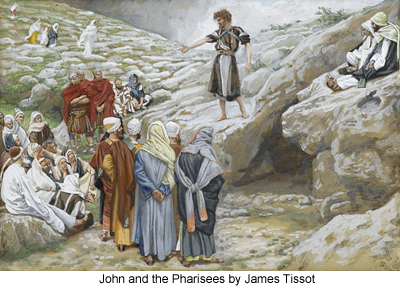 John was a heroic but tactless preacher. One day when he was preaching and baptizing on the west bank of the Jordan, a group of Pharisees and a number of Sadducees came forward and presented themselves for baptism. Before leading them down into the water, John, addressing them as a group said: "Who warned you to flee, as vipers before the fire, from the wrath to come? I will baptize you, but I warn you to bring forth fruit worthy of sincere repentance if you would receive the remission of your sins. Tell me not that Abraham is your father. I declare that God is able of these twelve stones here before you to raise up worthy children for Abraham. And even now is the ax laid to the very roots of the trees. Every tree that brings not forth good fruit is destined to be cut down and cast into the fire." (The twelve stones to which he referred were the reputed memorial stones set up by Joshua to commemorate the crossing of the "twelve tribes" at this very point when they first entered the promised land.)

John conducted classes for his disciples, in the course of which he instructed them in the details of their new life and endeavored to answer their many questions. He counseled the teachers to instruct in the spirit as well as the letter of the law. He instructed the rich to feed the poor; to the tax gatherers he said: "Extort no more than that which is assigned you." To the soldiers he said: "Do no violence and exact nothing wrongfully—be content with your wages." While he counseled all: "Make ready for the end of the age—the kingdom of heaven is at hand." ~ The Urantia Book, (135:6.1)