Differences in John the Baptist's and Jesus' Teachings 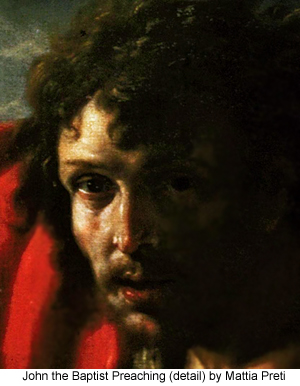 When John preached the coming kingdom, the burden of his message was: Repent! flee from the wrath to come. When Jesus began to preach, there remained the exhortation to repentance, but such a message was always followed by the gospel, the good tidings of the joy and liberty of the new kingdom. ~ The Urantia Book, (136:0.2)

Jesus made plain to his apostles the difference between the repentance of so-called good works as taught by the Jews and the change of mind by faith—the new birth—which he required as the price of admission to the kingdom. He taught his apostles that faith was the only requisite to entering the Father's kingdom. John had taught them "repentance—to flee from the wrath to come." Jesus taught, "Faith is the open door for entering into the present, perfect, and eternal love of God." Jesus did not speak like a prophet, one who comes to declare the word of God. He seemed to speak of himself as one having authority. Jesus sought to divert their minds from miracle seeking to the finding of a real and personal experience in the satisfaction and assurance of the indwelling of God's spirit of love and saving grace. ~ The Urantia Book, (138 :8.8)

Jesus did not vehemently denounce even the Pharisees, as did John. He knew many of the scribes and Pharisees were honest of heart; he understood their enslaving bondage to religious traditions. Jesus laid great emphasis on "first making the tree good." ~ The Urantia Book, (140 :8.22)

...Said Jesus: "John preached a baptism of repentance, sorrow for the old way of living. You are to proclaim the baptism of fellowship with God. Preach repentance to those who stand in need of such teaching, but to those already seeking sincere entrance to the kingdom, open the doors wide and bid them enter into the joyous fellowship of the sons of God." ~ The Urantia Book, (140 :10.1)

[Jesus] explained that the "kingdom idea" was not the best way to illustrate man's relation to God; that he employed such figures of speech because the Jewish people were expecting the kingdom, and because John had preached in terms of the coming kingdom. Jesus said: "The people of another age will better understand the gospel of the kingdom when it is presented in terms expressive of the family relationship—when man understands religion as the teaching of the fatherhood of God and the brotherhood of man, sonship with God." Then the Master discoursed at some length on the earthly family as an illustration of the heavenly family, restating the two fundamental laws of living: the first commandment of love for the father, the head of the family, and the second commandment of mutual love among the children, to love your brother as yourself. And then he explained that such a quality of brotherly affection would invariably manifest itself in unselfish and loving social service. ~ The Urantia Book, (142 :7.4)

At one of the evening conferences, Andrew asked Jesus: "Master, are we to practice self-denial as John taught us, or are we to strive for the self-control of your teaching? Wherein does your teaching differ from that of John?" Jesus answered: "John indeed taught you the way of righteousness in accordance with the light and laws of his fathers, and that was the religion of self-examination and self-denial. But I come with a new message of self-forgetfulness and self-control. I show to you the way of life as revealed to me by my Father in heaven." ~ The Urantia Book, (143 :2.2)

"...He who reaps receives wages and gathers this fruit to eternal life; consequently the sowers and the reapers rejoice together. For herein is the saying true: `One sows and another reaps.' I am now sending you to reap that whereon you have not labored; others have labored, and you are about to enter into their labor." This he said in reference to the preaching of John the Baptist. ~ The Urantia Book, (143 :6.1)

John had taught his disciples a prayer, a prayer for salvation in the coming kingdom. Although Jesus never forbade his followers to use John's form of prayer, the apostles very early perceived that their Master did not fully approve of the practice of uttering set and formal prayers. Nevertheless, believers constantly requested to be taught how to pray. The twelve longed to know what form of petition Jesus would approve. And it was chiefly because of this need for some simple petition for the common people that Jesus at this time consented, in answer to Thomas's request, to teach them a suggestive form of prayer. ~ The Urantia Book, (144 :1.7)

"John indeed taught you a simple form of prayer: `O Father, cleanse us from sin, show us your glory, reveal your love, and let your spirit sanctify our hearts forevermore, Amen!' He taught this prayer that you might have something to teach the multitude. He did not intend that you should use such a set and formal petition as the expression of your own souls in prayer." ~ The Urantia Book, (144 :2.1)

It is not strange that the apostles desired Jesus to teach them a model prayer for believers. John the Baptist had taught his followers several prayers; all great teachers had formulated prayers for their pupils. The religious teachers of the Jews had some twenty-five or thirty set prayers which they recited in the synagogues and even on the street corners. Jesus was particularly averse to praying in public. Up to this time the twelve had heard him pray only a few times. They observed him spending entire nights at prayer or worship, and they were very curious to know the manner or form of his petitions. They were really hard pressed to know what to answer the multitudes when they asked to be taught how to pray as John had taught his disciples. ~ The Urantia Book, (144 :3.4)

Jesus never called the Father a king, and he very much regretted that the Jewish hope for a restored kingdom and John's proclamation of a coming kingdom made it necessary for him to denominate his proposed spiritual brotherhood the kingdom of heaven. With the one exception—the declaration that "God is spirit" —Jesus never referred to Deity in any manner other than in terms descriptive of his own personal relationship with the First Source and Center of Paradise. ~ The Urantia Book, (169 :4.6)

Jesus foresaw that a social organization, or church, would follow the progress of the true spiritual kingdom, and that is why he never opposed the apostles' practicing the rite of John's baptism. He taught that the truth-loving soul, the one who hungers and thirsts for righteousness, for God, is admitted by faith to the spiritual kingdom; at the same time the apostles taught that such a believer is admitted to the social organization of disciples by the outward rite of baptism. ~ The Urantia Book, (170 :5.13)