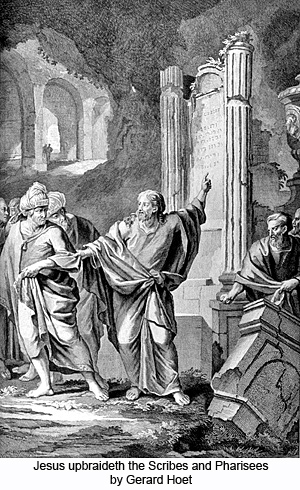 173:3.1As the caviling Pharisees stood there in silence before Jesus, he looked down on them and said: “Since you are in doubtabout John’s mission and arrayed in enmity against theteaching and the works of the Son of Man, give ear while I tell you aparable: A certain great and respected landholder had two sons, anddesiring the help of his sons in the management of his large estates,he came to one of them, saying, `Son, go work today in myvineyard.’ And this unthinking son answered his father,saying, `I will not go'; but afterward he repented and went. When hehad found his older son, likewise he said to him, `Son, go work in myvineyard.’ And this hypocritical and unfaithful son answered,`Yes, my father, I will go.’ But when his father haddeparted, he went not. Let me ask you, which of these sons really didhis father’s will?”

173:3.2And the people spoke with one accord, saying, “The firstson.” And then said Jesus: “Even so; and now do Ideclare that the publicans and harlots, even though they appear to refuse the call to repentance,shall see the error of their way and go on into the kingdom of Godbefore you, who make great pretensions of serving the Father in heavenwhile you refuse to do the works of the Father. It was not you, the Phariseesand scribes, who believed John, but rather the publicans and sinners; neither do youbelieve my teaching, but the common people hear my wordsgladly.”

173:3.3Jesus did not despise the Pharisees and Sadducees personally. It was their systems of teaching and practice which hesought to discredit. He was hostile to no man, but here was occurringthe inevitable clash between a new and living religion of the spirit and the older religion of ceremony, tradition, andauthority.