The Significance Of Pentecost 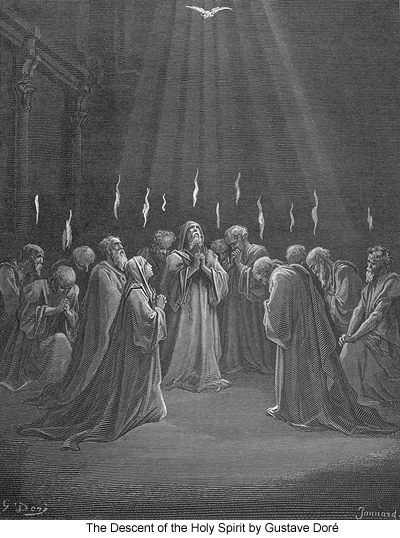 194:2.1 Jesus lived on earth and taught a gospel which redeemed man from the superstition that he was a child of the devil and elevated him to the dignity of a faith son of God. Jesus' message, as he preached it and lived it in his day, was an effective solvent for man's spiritual difficulties in that day of its statement. And now that he has personally left the world, he sends in his place his Spirit of Truth, who is designed to live in man and, for each new generation, to restate the Jesus message so that every new group of mortals to appear upon the face of the earth shall have a new and up-to-date version of the gospel, just such personal enlightenment and group guidance as will prove to be an effective solvent for man's ever-new and varied spiritual difficulties.

194:2.2 The first mission of this spirit is, of course, to foster and personalize truth, for it is the comprehension of truth that constitutes the highest form of human liberty. Next, it is the purpose of this spirit to destroy the believer's feeling of orphanhood. Jesus having been among men, all believers would experience a sense of loneliness had not the Spirit of Truth come to dwell in men's hearts.

194:2.3 This bestowal of the Son's spirit effectively prepared all normal men's minds for the subsequent universal bestowal of the Father's spirit (the Adjuster) upon all mankind. In a certain sense, this Spirit of Truth is the spirit of both the Universal Father and the Creator Son.

194:2.5 The spirit also came to help men recall and understand the words of the Master as well as to illuminate and reinterpret his life on earth.

194:2.6 Next, the Spirit of Truth came to help the believer to witness to the realities of Jesus' teachings and his life as he lived it in the flesh, and as he now again lives it anew and afresh in the individual believer of each passing generation of the spirit-filled sons of God.

194:2.7 Thus it appears that the Spirit of Truth comes really to lead all believers into all truth, into the expanding knowledge of the experience of the living and growing spiritual consciousness of the reality of eternal and ascending sonship with God.

194:2.8 Jesus lived a life which is a revelation of man submitted to the Father's will, not an example for any man literally to attempt to follow. This life in the flesh, together with his death on the cross and subsequent resurrection, presently became a new gospel of the ransom which had thus been paid in order to purchase man back from the clutch of the evil one—from the condemnation of an offended God. Nevertheless, even though the gospel did become greatly distorted, it remains a fact that this new message about Jesus carried along with it many of the fundamental truths and teachings of his earlier gospel of the kingdom. And, sooner or later, these concealed truths of the fatherhood of God and the brotherhood of men will emerge to effectually transform the civilization of all mankind.

194:2.9 But these mistakes of the intellect in no way interfered with the believer's great progress in growth in spirit. In less than a month after the bestowal of the Spirit of Truth, the apostles made more individual spiritual progress than during their almost four years of personal and loving association with the Master. Neither did this substitution of the fact of the resurrection of Jesus for the saving gospel truth of sonship with God in any way interfere with the rapid spread of their teachings; on the contrary, this overshadowing of Jesus' message by the new teachings about his person and resurrection seemed greatly to facilitate the preaching of the good news.

194:2.10 The term "baptism of the spirit," which came into such general use about this time, merely signified the conscious reception of this gift of the Spirit of Truth and the personal acknowledgment of this new spiritual power as an augmentation of all spiritual influences previously experienced by God-knowing souls.