The Return To Capernaum 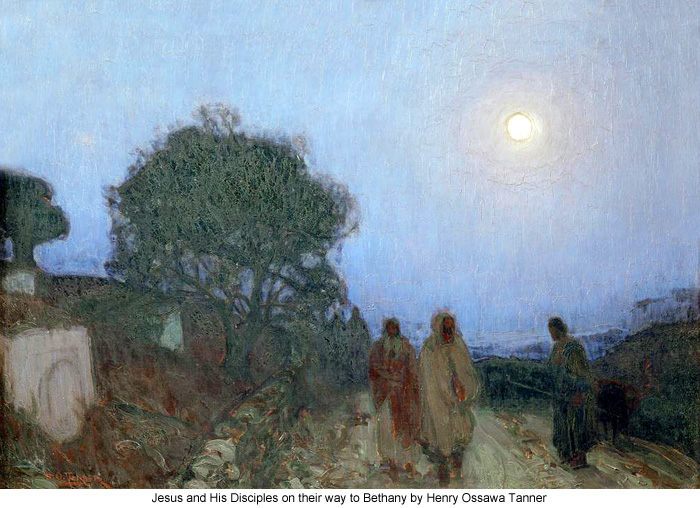 152:7.1 Sunday, April 3, Jesus, accompanied only by the twelve apostles, started from Bethsaida on the journey to Jerusalem. To avoid the multitudes and to attract as little attention as possible, they journeyed by way of Gerasa and Philadelphia. He forbade them to do any public teaching on this trip; neither did he permit them to teach or preach while sojourning in Jerusalem. They arrived at Bethany, near Jerusalem, late on Wednesday evening, April 6. For this one night they stopped at the home of Lazarus, Martha, and Mary, but the next day they separated. Jesus, with John, stayed at the home of a believer named Simon, near the house of Lazarus in Bethany. Judas Iscariot and Simon Zelotes stopped with friends in Jerusalem, while the rest of the apostles sojourned, two and two, in different homes.

152:7.2 Jesus entered Jerusalem only once during this Passover, and that was on the great day of the feast. Many of the Jerusalem believers were brought out by Abner to meet Jesus at Bethany. During this sojourn at Jerusalem the twelve learned how bitter the feeling was becoming toward their Master. They departed from Jerusalem all believing that a crisis was impending.

152:7.3 On Sunday, April 24, Jesus and the apostles left Jerusalem for Bethsaida, going by way of the coast cities of Joppa, Caesarea, and Ptolemais. Thence, overland they went by Ramah and Chorazin to Bethsaida, arriving on Friday, April 29. Immediately on reaching home, Jesus dispatched Andrew to ask of the ruler of the synagogue permission to speak the next day, that being the Sabbath, at the afternoon service. And Jesus well knew that that would be the last time he would ever be permitted to speak in the Capernaum synagogue.