Home Jesus Illustrated Stories "This Is The Prophet Of Galilee, Jesus Of Nazareth"

"This Is The Prophet Of Galilee, Jesus Of Nazareth" 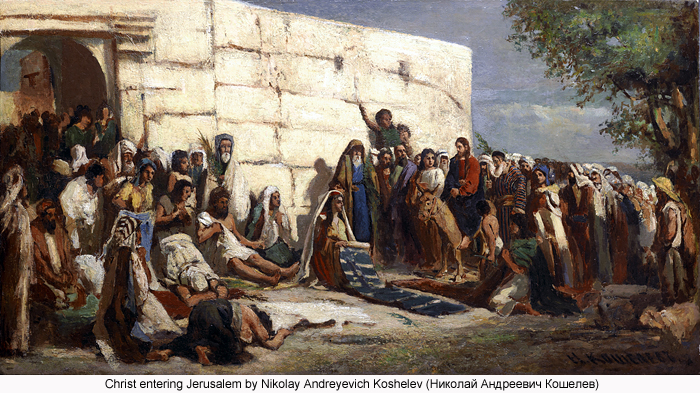 172:3.12 Along with the multitude which poured out to welcome the Master, there came also many of the Pharisees and his other enemies. They were so much perturbed by this sudden and unexpected outburst of popular acclaim that they feared to arrest him lest such action precipitate an open revolt of the populace. They greatly feared the attitude of the large numbers of visitors, who had heard much of Jesus, and who, many of them, believed in him.

172:3.13 As they neared Jerusalem, the crowd became more demonstrative, so much so that some of the Pharisees made their way up alongside Jesus and said: "Teacher, you should rebuke your disciples and exhort them to behave more seemly." Jesus answered: "It is only fitting that these children should welcome the Son of Peace, whom the chief priests have rejected. It would be useless to stop them lest in their stead these stones by the roadside cry out."

172:3.14 The Pharisees hastened on ahead of the procession to rejoin the Sanhedrin, which was then in session at the temple, and they reported to their associates: "Behold, all that we do is of no avail; we are confounded by this Galilean. The people have gone mad over him; if we do not stop these ignorant ones, all the world will go after him."

172:3.15 There really was no deep significance to be attached to this superficial and spontaneous outburst of popular enthusiasm. This welcome, although it was joyous and sincere, did not betoken any real or deep-seated conviction in the hearts of this festive multitude. These same crowds were equally as willing quickly to reject Jesus later on this week when the Sanhedrin once took a firm and decided stand against him, and when they became disillusioned—when they realized that Jesus was not going to establish the kingdom in accordance with their long-cherished expectations.

172:3.16 But the whole city was mightily stirred up, insomuch that everyone asked, "Who is this man?" And the multitude answered, "This is the prophet of Galilee, Jesus of Nazareth."