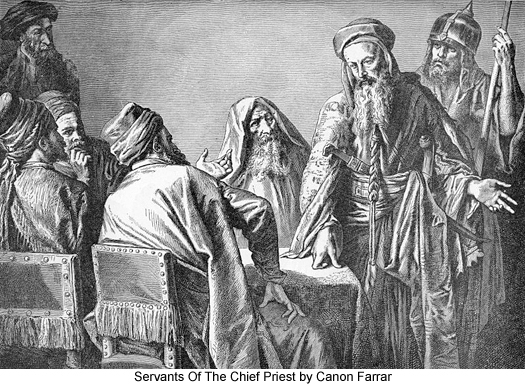 190:3.3 As a result of sending out the messengers during the midforenoon and from the unconscious leakage of intimations concerning this appearance of Jesus at Joseph's house, word began to come to the rulers of the Jews during the early evening that it was being reported about the city that Jesus had risen, and that many persons were claiming to have seen him. The Sanhedrists were thoroughly aroused by these rumors. After a hasty consultation with Annas, Caiaphas called a meeting of the Sanhedrin to convene at eight o'clock that evening. It was at this meeting that action was taken to throw out of the synagogues any person who made mention of Jesus' resurrection. It was even suggested that anyone claiming to have seen him should be put to death; this proposal, however, did not come to a vote since the meeting broke up in confusion bordering on actual panic. They had dared to think they were through with Jesus. They were about to discover that their real trouble with the man of Nazareth had just begun.

190:4.2 Rumors of Jesus' resurrection and reports concerning the many appearances to his followers are spreading rapidly, and the whole city is being wrought up to a high pitch of excitement. Already the Master has appeared to his family, to the women, and to the Greeks and presently he manifests himself in the midst of the apostles. The Sanhedrin is soon to begin the consideration of these new problems which have been so suddenly thrust upon the Jewish rulers. Jesus thinks much about his apostles but desires that they be left alone for a few more hours of solemn reflection and thoughtful consideration before he visits them.