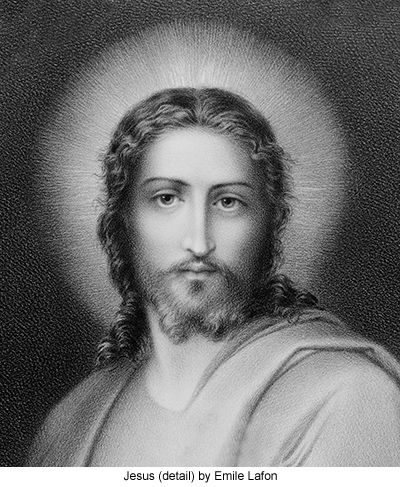 174:5.1 About noontime, as Philip was purchasing supplies for the new camp which was that day being established near Gethsemane, he was accosted by a delegation of strangers, a group of believing Greeks from Alexandria, Athens, and Rome, whose spokesman said to the apostle: "You have been pointed out to us by those who know you; so we come to you, Sir, with the request to see Jesus, your Master." Philip was taken by surprise thus to meet these prominent and inquiring Greek gentiles in the market place, and, since Jesus had so explicitly charged all of the twelve not to engage in any public teaching during the Passover week, he was a bit perplexed as to the right way to handle this matter. He was also disconcerted because these men were foreign gentiles. If they had been Jews or near-by and familiar gentiles, he would not have hesitated so markedly. What he did was this: He asked these Greeks to remain right where they were. As he hastened away, they supposed that he went in search of Jesus, but in reality he hurried off to the home of Joseph, where he knew Andrew and the other apostles were at lunch; and calling Andrew out, he explained the purpose of his coming, and then, accompanied by Andrew, he returned to the waiting Greeks.

174:5.2 Since Philip had about finished the purchasing of supplies, he and Andrew returned with the Greeks to the home of Joseph, where Jesus received them; and they sat near while he spoke to his apostles and a number of leading disciples assembled at this luncheon. Said Jesus:

174:5.3 "My Father sent me to this world to reveal his loving-kindness to the children of men, but those to whom I first came have refused to receive me. True, indeed, many of you have believed my gospel for yourselves, but the children of Abraham and their leaders are about to reject me, and in so doing they will reject Him who sent me. I have freely proclaimed the gospel of salvation to this people; I have told them of sonship with joy, liberty, and life more abundant in the spirit. My Father has done many wonderful works among these fear-ridden sons of men. But truly did the Prophet Isaiah refer to this people when he wrote: `Lord, who has believed our teachings? And to whom has the Lord been revealed?' Truly have the leaders of my people deliberately blinded their eyes that they see not, and hardened their hearts lest they believe and be saved. All these years have I sought to heal them of their unbelief that they might be recipients of the Father's eternal salvation. I know that not all have failed me; some of you have indeed believed my message. In this room now are a full score of men who were once members of the Sanhedrin, or who were high in the councils of the nation, albeit even some of you still shrink from open confession of the truth lest they cast you out of the synagogue. Some of you are tempted to love the glory of men more than the glory of God. But I am constrained to show forbearance since I fear for the safety and loyalty of even some of those who have been so long near me, and who have lived so close by my side.

174:5.4 "In this banquet chamber I perceive there are assembled Jews and gentiles in about equal numbers, and I would address you as the first and last of such a group that I may instruct in the affairs of the kingdom before I go to my Father."

174:5.5 These Greeks had been in faithful attendance upon Jesus' teaching in the temple. On Monday evening they had held a conference at the home of Nicodemus, which lasted until the dawn of day, and thirty of them had elected to enter the kingdom.

174:5.6 As Jesus stood before them at this time, he perceived the end of one dispensation and the beginning of another. Turning his attention to the Greeks, the Master said:

174:5.7 "He who believes this gospel, believes not merely in me but in Him who sent me. When you look upon me, you see not only the Son of Man but also Him who sent me. I am the light of the world, and whosoever will believe my teaching shall no longer abide in darkness. If you gentiles will hear me, you shall receive the words of life and shall enter forthwith into the joyous liberty of the truth of sonship with God. If my fellow countrymen, the Jews, choose to reject me and to refuse my teachings, I will not sit in judgment on them, for I came not to judge the world but to offer it salvation. Nevertheless, they who reject me and refuse to receive my teaching shall be brought to judgment in due season by my Father and those whom he has appointed to sit in judgment on such as reject the gift of mercy and the truths of salvation. Remember, all of you, that I speak not of myself, but that I have faithfully declared to you that which the Father commanded I should reveal to the children of men. And these words which the Father directed me to speak to the world are words of divine truth, everlasting mercy, and eternal life.

174:5.8 "But to both Jew and gentile I declare the hour has about come when the Son of Man will be glorified. You well know that, except a grain of wheat falls into the earth and dies, it abides alone; but if it dies in good soil, it springs up again to life and bears much fruit. He who selfishly loves his life stands in danger of losing it; but he who is willing to lay down his life for my sake and the gospel's shall enjoy a more abundant existence on earth and in heaven, life eternal. If you will truly follow me, even after I have gone to my Father, then shall you become my disciples and the sincere servants of your fellow mortals.

174:5.9 "I know my hour is approaching, and I am troubled. I perceive that my people are determined to spurn the kingdom, but I am rejoiced to receive these truth-seeking gentiles who come here today inquiring for the way of light. Nevertheless, my heart aches for my people, and my soul is distraught by that which lies just before me. What shall I say as I look ahead and discern what is about to befall me? Shall I say, Father save me from this awful hour? For this very purpose have I come into the world and even to this hour. Rather will I say, and pray that you will join me: Father, glorify your name; your will be done."

174:5.10 When Jesus had thus spoken, the Personalized Adjuster of his indwelling during prebaptismal times appeared before him, and as he paused noticeably, this now mighty spirit of the Father's representation spoke to Jesus of Nazareth, saying: "I have glorified my name in your bestowals many times, and I will glorify it once more."

174:5.11 While the Jews and gentiles here assembled heard no voice, they could not fail to discern that the Master had paused in his speaking while a message came to him from some superhuman source. They all said, every man to the one who was by him, "An angel has spoken to him."

174:5.12 Then Jesus continued to speak: "All this has not happened for my sake but for yours. I know of a certainty that the Father will receive me and accept my mission in your behalf, but it is needful that you be encouraged and be made ready for the fiery trial which is just ahead. Let me assure you that victory shall eventually crown our united efforts to enlighten the world and liberate mankind. The old order is bringing itself to judgment; the Prince of this world I have cast down; and all men shall become free by the light of the spirit which I will pour out upon all flesh after I have ascended to my Father in heaven.

174:5.13 "And now I declare to you that I, if I be lifted up on earth and in your lives, will draw all men to myself and into the fellowship of my Father. You have believed that the Deliverer would abide on earth forever, but I declare that the Son of Man will be rejected by men, and that he will go back to the Father. Only a little while will I be with you; only a little time will the living light be among this darkened generation. Walk while you have this light so that the oncoming darkness and confusion may not overtake you. He who walks in the darkness knows not where he goes; but if you will choose to walk in the light, you shall all indeed become liberated sons of God. And now, all of you, come with me while we go back to the temple and I speak farewell words to the chief priests, the scribes, the Pharisees, the Sadducees, the Herodians, and the benighted rulers of Israel."

174:5.14 Having thus spoken, Jesus led the way over the narrow streets of Jerusalem back to the temple. They had just heard the Master say that this was to be his farewell discourse in the temple, and they followed him in silence and in deep meditation.