The Four Stages Of Jesus' Life And Ministry 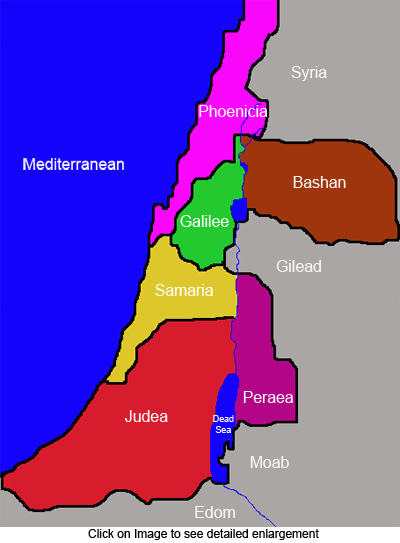 157:6.1 Jesus and the apostles remained another day at the home of Celsus, waiting for messengers to arrive from David Zebedee with funds. Following the collapse of the popularity of Jesus with the masses there occurred a great falling off in revenue. When they reached Caesarea Philippi, the treasury was empty. Matthew was loath to leave Jesus and his brethren at such a time, and he had no ready funds of his own to hand over to Judas as he had so many times done in the past. However, David Zebedee had foreseen this probable diminution of revenue and had accordingly instructed his messengers that, as they made their way through Judea, Samaria, and Galilee, they should act as collectors of money to be forwarded to the exiled apostles and their Master. And so, by evening of this day, these messengers arrived from Bethsaida bringing funds sufficient to sustain the apostles until their return to embark upon the Decapolis tour. Matthew expected to have money from the sale of his last piece of property in Capernaum by that time, having arranged that these funds should be anonymously turned over to Judas.

157:6.2 Neither Peter nor the other apostles had a very adequate conception of Jesus' divinity. They little realized that this was the beginning of a new epoch in their Master's career on earth, the time when the teacher-healer was becoming the newly conceived Messiah —the Son of God. From this time on a new note appeared in the Master's message. Henceforth his one ideal of living was the revelation of the Father, while his one idea in teaching was to present to his universe the personification of that supreme wisdom which can only be comprehended by living it. He came that we all might have life and have it more abundantly.

157:6.3 Jesus now entered upon the fourth and last stage of his human life in the flesh. The first stage was that of his childhood, the years when he was only dimly conscious of his origin, nature, and destiny as a human being. The second stage was the increasingly self-conscious years of youth and advancing manhood, during which he came more clearly to comprehend his divine nature and human mission. This second stage ended with the experiences and revelations associated with his baptism. The third stage of the Master's earth experience extended from the baptism through the years of his ministry as teacher and healer and up to this momentous hour of Peter's confession at Caesarea Philippi. This third period of his earth life embraced the times when his apostles and his immediate followers knew him as the Son of Man and regarded him as the Messiah. The fourth and last period of his earth career began here at Caesarea Philippi and extended on to the crucifixion. This stage of his ministry was characterized by his acknowledgment of divinity and embraced the labors of his last year in the flesh. During the fourth period, while the majority of his followers still regarded him as the Messiah, he became known to the apostles as the Son of God. Peter's confession marked the beginning of the new period of the more complete realization of the truth of his supreme ministry as a bestowal Son on Urantia and for an entire universe, and the recognition of that fact, at least hazily, by his chosen ambassadors.

157:6.4 Thus did Jesus exemplify in his life what he taught in his religion: the growth of the spiritual nature by the technique of living progress. He did not place emphasis, as did his later followers, upon the incessant struggle between the soul and the body. He rather taught that the spirit was easy victor over both and effective in the profitable reconciliation of much of this intellectual and instinctual warfare.

157:6.5 A new significance attaches to all of Jesus' teachings from this point on. Before Caesarea Philippi he presented the gospel of the kingdom as its master teacher. After Caesarea Philippi he appeared not merely as a teacher but as the divine representative of the eternal Father, who is the center and circumference of this spiritual kingdom, and it was required that he do all this as a human being, the Son of Man.

157:6.6 Jesus had sincerely endeavored to lead his followers into the spiritual kingdom as a teacher, then as a teacher-healer, but they would not have it so. He well knew that his earth mission could not possibly fulfill the Messianic expectations of the Jewish people; the olden prophets had portrayed a Messiah which he could never be. He sought to establish the Father's kingdom as the Son of Man, but his followers would not go forward in the adventure. Jesus, seeing this, then elected to meet his believers part way and in so doing prepared openly to assume the role of the bestowal Son of God.

157:6.7 Accordingly, the apostles heard much that was new as Jesus talked to them this day in the garden. And some of these pronouncements sounded strange even to them. Among other startling announcements they listened to such as the following:

157:6.8 "From this time on, if any man would have fellowship with us, let him assume the obligations of sonship and follow me. And when I am no more with you, think not that the world will treat you better than it did your Master. If you love me, prepare to prove this affection by your willingness to make the supreme sacrifice."

157:6.9 "And mark well my words: I have not come to call the righteous, but sinners. The Son of Man came not to be ministered to, but to minister and to bestow his life as the gift for all. I declare to you that I have come to seek and to save those who are lost."

157:6.10 "No man in this world now sees the Father except the Son who came forth from the Father. But if the Son be lifted up, he will draw all men to himself, and whosoever believes this truth of the combined nature of the Son shall be endowed with life that is more than age-abiding."

157:6.11 "We may not yet proclaim openly that the Son of Man is the Son of God, but it has been revealed to you; wherefore do I speak boldly to you concerning these mysteries. Though I stand before you in this physical presence, I came forth from God the Father. Before Abraham was, I am. I did come forth from the Father into this world as you have known me, and I declare to you that I must presently leave this world and return to the work of my Father." 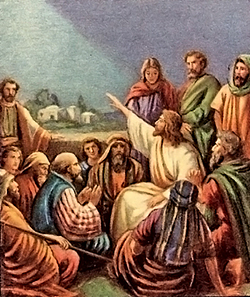 157:6.12 "And now can your faith comprehend the truth of these declarations in the face of my warning you that the Son of Man will not meet the expectations of your fathers as they conceived the Messiah? My kingdom is not of this world. Can you believe the truth about me in the face of the fact that, though the foxes have holes and the birds of heaven have nests, I have not where to lay my head?"

157:6.13 "Nevertheless, I tell you that the Father and I are one. He who has seen me has seen the Father. My Father is working with me in all these things, and he will never leave me alone in my mission, even as I will never forsake you when you presently go forth to proclaim this gospel throughout the world.

157:6.14 "And now have I brought you apart with me and by yourselves for a little while that you may comprehend the glory, and grasp the grandeur, of the life to which I have called you: the faith-adventure of the establishment of my Father's kingdom in the hearts of mankind, the building of my fellowship of living association with the souls of all who believe this gospel."

157:6.15 The apostles listened to these bold and startling statements in silence; they were stunned. And they dispersed in small groups to discuss and ponder the Master's words. They had confessed that he was the Son of God, but they could not grasp the full meaning of what they had been led to do.