The Emotional Suffering Of The Human Jesus 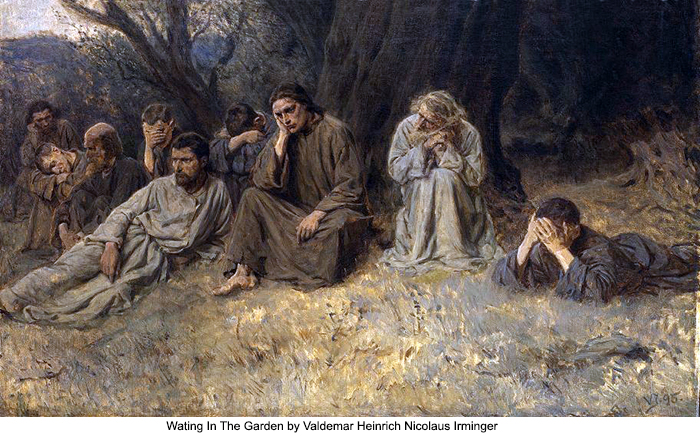 182:3.5 During the years that Jesus lived among his followers, they did, indeed, have much proof of his divine nature, but just now are they about to witness new evidences of his humanity. Just before the greatest of all the revelations of his divinity, his resurrection, must now come the greatest proofs of his mortal nature, his humiliation and crucifixion.

182:3.6 Each time he prayed in the garden, his humanity laid a firmer faith-hold upon his divinity; his human will more completely became one with the divine will of his Father. Among other words spoken to him by the mighty angel was the message that the Father desired his Son to finish his earth bestowal by passing through the creature experience of death just as all mortal creatures must experience material dissolution in passing from the existence of time into the progression of eternity.

182:3.7 Earlier in the evening it had not seemed so difficult to drink the cup, but as the human Jesus bade farewell to his apostles and sent them to their rest, the trial grew more appalling. Jesus experienced that natural ebb and flow of feeling which is common to all human experience, and just now he was weary from work, exhausted from the long hours of strenuous labor and painful anxiety concerning the safety of his apostles. While no mortal can presume to understand the thoughts and feelings of the incarnate Son of God at such a time as this, we know that he endured great anguish and suffered untold sorrow, for the perspiration rolled off his face in great drops. He was at last convinced that the Father intended to allow natural events to take their course; he was fully determined to employ none of his sovereign power as the supreme head of a universe to save himself.

182:3.8 The assembled hosts of a vast creation are now hovered over this scene under the transient joint command of Gabriel and the Personalized Adjuster of Jesus. The division commanders of these armies of heaven have repeatedly been warned not to interfere with these transactions on earth unless Jesus himself should order them to intervene.

182:3.9 The experience of parting with the apostles was a great strain on the human heart of Jesus; this sorrow of love bore down on him and made it more difficult to face such a death as he well knew awaited him. He realized how weak and how ignorant his apostles were, and he dreaded to leave them. He well knew that the time of his departure had come, but his human heart longed to find out whether there might not possibly be some legitimate avenue of escape from this terrible plight of suffering and sorrow. And when it had thus sought escape, and failed, it was willing to drink the cup. The divine mind of Michael knew he had done his best for the twelve apostles; but the human heart of Jesus wished that more might have been done for them before they should be left alone in the world. Jesus' heart was being crushed; he truly loved his brethren. He was isolated from his family in the flesh; one of his chosen associates was betraying him. His father Joseph's people had rejected him and thereby sealed their doom as a people with a special mission on earth. His soul was tortured by baffled love and rejected mercy. It was just one of those awful human moments when everything seems to bear down with crushing cruelty and terrible agony.

182:3.10 Jesus' humanity was not insensible to this situation of private loneliness, public shame, and the appearance of the failure of his cause. All these sentiments bore down on him with indescribable heaviness. In this great sorrow his mind went back to the days of his childhood in Nazareth and to his early work in Galilee. At the time of this great trial there came up in his mind many of those pleasant scenes of his earthly ministry. And it was from these old memories of Nazareth, Capernaum, Mount Hermon, and of the sunrise and sunset on the shimmering Sea of Galilee, that he soothed himself as he made his human heart strong and ready to encounter the traitor who should so soon betray him.

182:3.11 Before Judas and the soldiers arrived, the Master had fully regained his customary poise; the spirit had triumphed over the flesh; faith had asserted itself over all human tendencies to fear or entertain doubt. The supreme test of the full realization of the human nature had been met and acceptably passed. Once more the Son of Man was prepared to face his enemies with equanimity and in the full assurance of his invincibility as a mortal man unreservedly dedicated to the doing of his Father's will.