The Destruction Of Jerusalem, And Jesus' Second Coming 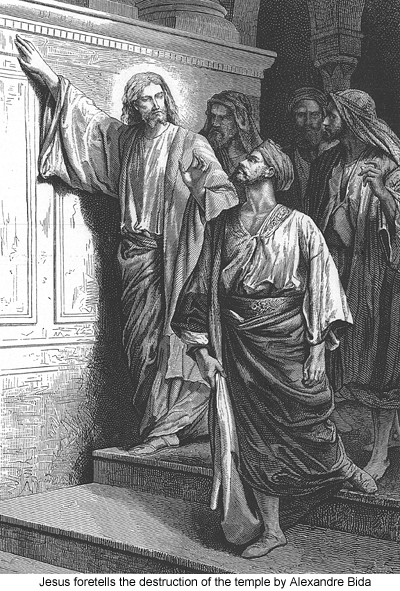 THIS TUESDAY AFTERNOON, as Jesus and the apostles passed out of the temple on their way to the Gethsemane camp, Matthew, calling attention to the temple construction, said: "Master, observe what manner of buildings these are. See the massive stones and the beautiful adornment; can it be that these buildings are to be destroyed?" As they went on toward Olivet, Jesus said: "You see these stones and this massive temple; verily, verily, I say to you: In the days soon to come there shall not be left one stone upon another. They shall all be thrown down." These remarks depicting the destruction of the sacred temple aroused the curiosity of the apostles as they walked along behind the Master; they could conceive of no event short of the end of the world which would occasion the destruction of the temple.

176:0.2 In order to avoid the crowds passing along the Kidron valley toward Gethsemane, Jesus and his associates were minded to climb up the western slope of Olivet for a short distance and then follow a trail over to their private camp near Gethsemane located a short distance above the public camping ground. As they turned to leave the road leading on to Bethany, they observed the temple, glorified by the rays of the setting sun; and while they tarried on the mount, they saw the lights of the city appear and beheld the beauty of the illuminated temple; and there, under the mellow light of the full moon, Jesus and the twelve sat down. The Master talked with them, and presently Nathaniel asked this question: "Tell us, Master, how shall we know when these events are about to come to pass?"

176:1.1 In answering Nathaniel's question, Jesus said: "Yes, I will tell you about the times when this people shall have filled up the cup of their iniquity; when justice shall swiftly descend upon this city of our fathers. I am about to leave you; I go to the Father. After I leave you, take heed that no man deceive you, for many will come as deliverers and will lead many astray. When you hear of wars and rumors of wars, be not troubled, for though all these things will happen, the end of Jerusalem is not yet at hand. You should not be perturbed by famines or earthquakes; neither should you be concerned when you are delivered up to the civil authorities and are persecuted for the sake of the gospel. You will be thrown out of the synagogue and put in prison for my sake, and some of you will be killed. When you are brought up before governors and rulers, it shall be for a testimony of your faith and to show your steadfastness in the gospel of the kingdom. And when you stand before judges, be not anxious beforehand as to what you should say, for the spirit will teach you in that very hour what you should answer your adversaries. In these days of travail, even your own kinsfolk, under the leadership of those who have rejected the Son of Man, will deliver you up to prison and death. For a time you may be hated by all men for my sake, but even in these persecutions I will not forsake you; my spirit will not desert you. Be patient! doubt not that this gospel of the kingdom will triumph over all enemies and, eventually, be proclaimed to all nations."

176:1.2 Jesus paused while he looked down upon the city. The Master realized that the rejection of the spiritual concept of the Messiah, the determination to cling persistently and blindly to the material mission of the expected deliverer, would presently bring the Jews in direct conflict with the powerful Roman armies, and that such a contest could only result in the final and complete overthrow of the Jewish nation. When his people rejected his spiritual bestowal and refused to receive the light of heaven as it so mercifully shone upon them, they thereby sealed their doom as an independent people with a special spiritual mission on earth. Even the Jewish leaders subsequently recognized that it was this secular idea of the Messiah which directly led to the turbulence which eventually brought about their destruction.

176:1.3 Since Jerusalem was to become the cradle of the early gospel movement, Jesus did not want its teachers and preachers to perish in the terrible overthrow of the Jewish people in connection with the destruction of Jerusalem; wherefore did he give these instructions to his followers. Jesus was much concerned lest some of his disciples become involved in these soon-coming revolts and so perish in the downfall of Jerusalem.

176:1.4 Then Andrew inquired: "But, Master, if the Holy City and the temple are to be destroyed, and if you are not here to direct us, when should we forsake Jerusalem?" Said Jesus: "You may remain in the city after I have gone, even through these times of travail and bitter persecution, but when you finally see Jerusalem being encompassed by the Roman armies after the revolt of the false prophets, then will you know that her desolation is at hand; then must you flee to the mountains. Let none who are in the city and around about tarry to save aught, neither let those who are outside dare to enter therein. There will be great tribulation, for these will be the days of gentile vengeance. And after you have deserted the city, this disobedient people will fall by the edge of the sword and will be led captive into all nations; and so shall Jerusalem be trodden down by the gentiles. In the meantime, I warn you, be not deceived. If any man comes to you, saying, `Behold, here is the Deliverer,' or `Behold, there is he,' believe it not, for many false teachers will arise and many will be led astray; but you should not be deceived, for I have told you all this beforehand."

176:1.5 The apostles sat in silence in the moonlight for a considerable time while these astounding predictions of the Master sank into their bewildered minds. And it was in conformity with this very warning that practically the entire group of believers and disciples fled from Jerusalem upon the first appearance of the Roman troops, finding a safe shelter in Pella to the north.

176:1.6 Even after this explicit warning, many of Jesus' followers interpreted these predictions as referring to the changes which would obviously occur in Jerusalem when the reappearing of the Messiah would result in the establishment of the New Jerusalem and in the enlargement of the city to become the world's capital. In their minds these Jews were determined to connect the destruction of the temple with the "end of the world." They believed this New Jerusalem would fill all Palestine; that the end of the world would be followed by the immediate appearance of the "new heavens and the new earth." And so it was not strange that Peter should say: "Master, we know that all things will pass away when the new heavens and the new earth appear, but how shall we know when you will return to bring all this about?"

176:1.7 When Jesus heard this, he was thoughtful for some time and then said: "You ever err since you always try to attach the new teaching to the old; you are determined to misunderstand all my teaching; you insist on interpreting the gospel in accordance with your established beliefs. Nevertheless, I will try to enlighten you."