The Apostles Comfort The Sick 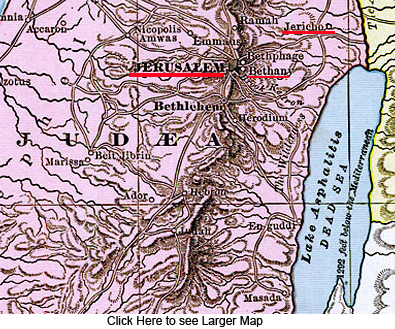 141:8.1 Throughout the four weeks' sojourn at Bethany beyond Jordan, several times each week Andrew would assign apostolic couples to go up to Jericho for a day or two. John had many believers in Jericho, and the majority of them welcomed the more advanced teachings of Jesus and his apostles. On these Jericho visits the apostles began more specifically to carry out Jesus' instructions to minister to the sick; they visited every house in the city and sought to comfort every afflicted person.

141:8.2 The apostles did some public work in Jericho, but their efforts were chiefly of a more quiet and personal nature. They now made the discovery that the good news of the kingdom was very comforting to the sick; that their message carried healing for the afflicted. And it was in Jericho that Jesus' commission to the twelve to preach the glad tidings of the kingdom and minister to the afflicted was first fully carried into effect.

141:8.3 They stopped in Jericho on the way up to Jerusalem and were overtaken by a delegation from Mesopotamia that had come to confer with Jesus. The apostles had planned to spend but a day here, but when these truth seekers from the East arrived, Jesus spent three days with them, and they returned to their various homes along the Euphrates happy in the knowledge of the new truths of the kingdom of heaven.