Ordination Of The Seventy 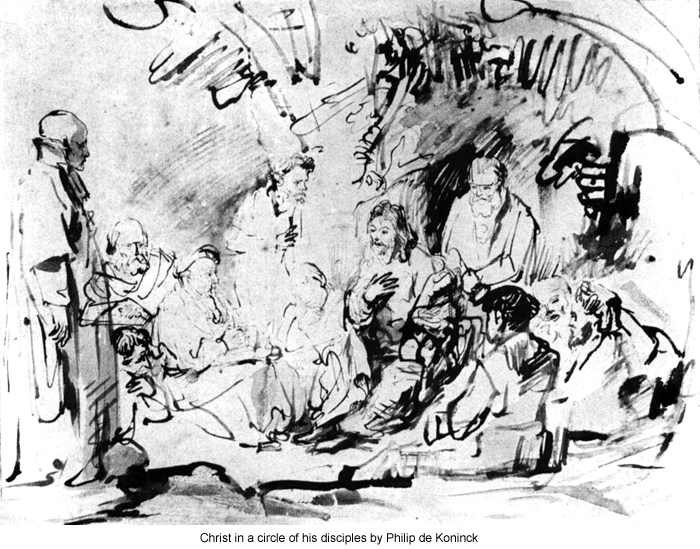 163:1.1 The seventy were ordained by Jesus on Sabbath afternoon, November 19, at the Magadan Camp, and Abner was placed at the head of these gospel preachers and teachers. This corps of seventy consisted of Abner and ten of the former apostles of John, fifty-one of the earlier evangelists, and eight other disciples who had distinguished themselves in the service of the kingdom.

163:1.2 About two o'clock on this Sabbath afternoon, between showers of rain, a company of believers, augmented by the arrival of David and the majority of his messenger corps and numbering over four hundred, assembled on the shore of the lake of Galilee to witness the ordination of the seventy.

163:1.3 Before Jesus laid his hands upon the heads of the seventy to set them apart as gospel messengers, addressing them, he said: "The harvest is indeed plenteous, but the laborers are few; therefore I exhort all of you to pray that the Lord of the harvest will send still other laborers into his harvest. I am about to set you apart as messengers of the kingdom; I am about to send you to Jew and gentile as lambs among wolves. As you go your ways, two and two, I instruct you to carry neither purse nor extra clothing, for you go forth on this first mission for only a short season. Salute no man by the way, attend only to your work. Whenever you go to stay at a home, first say: Peace be to this household. If those who love peace live therein, you shall abide there; if not, then shall you depart. And having selected this home, remain there for your stay in that city, eating and drinking whatever is set before you. And you do this because the laborer is worthy of his sustenance. Move not from house to house because a better lodging may be offered. Remember, as you go forth proclaiming peace on earth and good will among men, you must contend with bitter and self-deceived enemies; therefore be as wise as serpents while you are also as harmless as doves.

163:1.4 "And everywhere you go, preach, saying, `The kingdom of heaven is at hand,' and minister to all who may be sick in either mind or body. Freely you have received of the good things of the kingdom; freely give. If the people of any city receive you, they shall find an abundant entrance into the Father's kingdom; but if the people of any city refuse to receive this gospel, still shall you proclaim your message as you depart from that unbelieving community, saying, even as you leave, to those who reject your teaching: `Notwithstanding you reject the truth, it remains that the kingdom of God has come near you.' He who hears you hears me. And he who hears me hears Him who sent me. He who rejects your gospel message rejects me. And he who rejects me rejects Him who sent me."

163:1.5 When Jesus had thus spoken to the seventy, he began with Abner and, as they knelt in a circle about him, laid his hands upon the head of every man.

163:1.6 Early the next morning Abner sent the seventy messengers into all the cities of Galilee, Samaria, and Judea. And these thirty-five couples went forth preaching and teaching for about six weeks, all of them returning to the new camp near Pella, in Perea, on Friday, December 30.