The Visit With Nicodemus - Rebirth In The Spirit 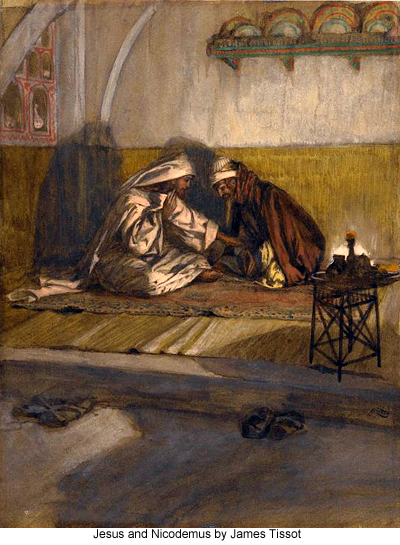 142:6.1 One evening at the home of Flavius there came to see Jesus one Nicodemus, a wealthy and elderly member of the Jewish Sanhedrin. He had heard much about the teachings of this Galilean, and so he went one afternoon to hear him as he taught in the temple courts. He would have gone often to hear Jesus teach, but he feared to be seen by the people in attendance upon his teaching, for already were the rulers of the Jews so at variance with Jesus that no member of the Sanhedrin would want to be identified in any open manner with him. Accordingly, Nicodemus had arranged with Andrew to see Jesus privately and after nightfall on this particular evening. Peter, James, and John were in Flavius's garden when the interview began, but later they all went into the house where the discourse continued.

142:6.2 In receiving Nicodemus, Jesus showed no particular deference; in talking with him, there was no compromise or undue persuasiveness. The Master made no attempt to repulse his secretive caller, nor did he employ sarcasm. In all his dealings with the distinguished visitor, Jesus was calm, earnest, and dignified. Nicodemus was not an official delegate of the Sanhedrin; he came to see Jesus wholly because of his personal and sincere interest in the Master's teachings.

142:6.3 Upon being presented by Flavius, Nicodemus said: "Rabbi, we know that you are a teacher sent by God, for no mere man could so teach unless God were with him. And I am desirous of knowing more about your teachings regarding the coming kingdom."

142:6.4 Jesus answered Nicodemus: "Verily, verily, I say to you, Nicodemus, except a man be born from above, he cannot see the kingdom of God." Then replied Nicodemus: "But how can a man be born again when he is old? He cannot enter a second time into his mother's womb to be born."

142:6.6 Nicodemus replied: "But I do not understand-how can that be?" Said Jesus: "Can it be that you are a teacher in Israel and yet ignorant of all this? It becomes, then, the duty of those who know about the realities of the spirit to reveal these things to those who discern only the manifestations of the material world. But will you believe us if we tell you of the heavenly truths? Do you have the courage, Nicodemus, to believe in one who has descended from heaven, even the Son of Man?"

142:6.7 And Nicodemus said: "But how can I begin to lay hold upon this spirit which is to remake me in preparation for entering into the kingdom?" Jesus answered: "Already does the spirit of the Father in heaven indwell you. If you would be led by this spirit from above, very soon would you begin to see with the eyes of the spirit, and then by the wholehearted choice of spirit guidance would you be born of the spirit since your only purpose in living would be to do the will of your Father who is in heaven. And so finding yourself born of the spirit and happily in the kingdom of God, you would begin to bear in your daily life the abundant fruits of the spirit."

142:6.8 Nicodemus was thoroughly sincere. He was deeply impressed but went away bewildered. Nicodemus was accomplished in self-development, in self-restraint, and even in high moral qualities. He was refined, egoistic, and altruistic; but he did not know how to submit his will to the will of the divine Father as a little child is willing to submit to the guidance and leading of a wise and loving earthly father, thereby becoming in reality a son of God, a progressive heir of the eternal kingdom.

142:6.9 But Nicodemus did summon faith enough to lay hold of the kingdom. He faintly protested when his colleagues of the Sanhedrin sought to condemn Jesus without a hearing; and with Joseph of Arimathea, he later boldly acknowledged his faith and claimed the body of Jesus, even when most of the disciples had fled in fear from the scenes of their Master's final suffering and death.