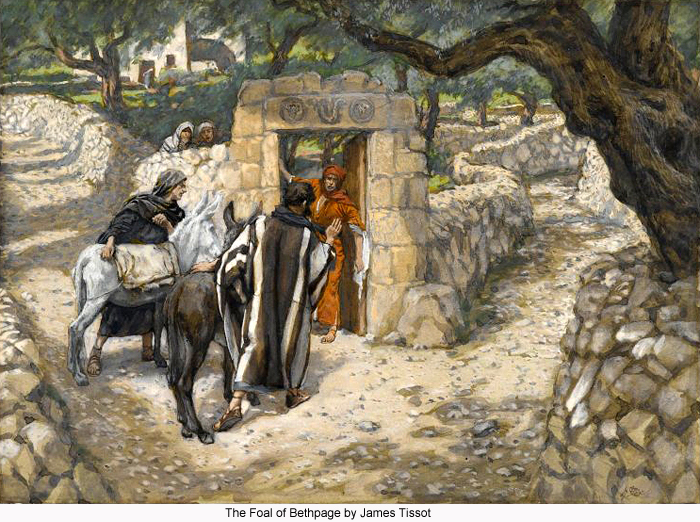 172:3.1 Bethany was about two miles from the temple, and it was half past one that Sunday afternoon when Jesus made ready to start for Jerusalem. He had feelings of profound affection for Bethany and its simple people. Nazareth, Capernaum, and Jerusalem had rejected him, but Bethany had accepted him, had believed in him. And it was in this small village, where almost every man, woman, and child were believers, that he chose to perform the mightiest work of his earth bestowal, the resurrection of Lazarus. He did not raise Lazarus that the villagers might believe, but rather because they already believed.

172:3.2 All morning Jesus had thought about his entry into Jerusalem. Heretofore he had always endeavored to suppress all public acclaim of him as the Messiah, but it was different now; he was nearing the end of his career in the flesh, his death had been decreed by the Sanhedrin, and no harm could come from allowing his disciples to give free expression to their feelings, just as might occur if he elected to make a formal and public entry into the city.

172:3.3 Jesus did not decide to make this public entrance into Jerusalem as a last bid for popular favor nor as a final grasp for power. Neither did he do it altogether to satisfy the human longings of his disciples and apostles. Jesus entertained none of the illusions of a fantastic dreamer; he well knew what was to be the outcome of this visit.

172:3.4 Having decided upon making a public entrance into Jerusalem, the Master was confronted with the necessity of choosing a proper method of executing such a resolve. Jesus thought over all of the many more or less contradictory so-called Messianic prophesies, but there seemed to be only one which was at all appropriate for him to follow. Most of these prophetic utterances depicted a king, the son and successor of David, a bold and aggressive temporal deliverer of all Israel from the yoke of foreign domination. But there was one Scripture that had sometimes been associated with the Messiah by those who held more to the spiritual concept of his mission, which Jesus thought might consistently be taken as a guide for his projected entry into Jerusalem. This Scripture was found in Zechariah, and it said: "Rejoice greatly, O daughter of Zion; shout, O daughter of Jerusalem. Behold, your king comes to you. He is just and he brings salvation. He comes as the lowly one, riding upon an ass, upon a colt, the foal of an ass."

172:3.5 A warrior king always entered a city riding upon a horse; a king on a mission of peace and friendship always entered riding upon an ass. Jesus would not enter Jerusalem as a man on horseback, but he was willing to enter peacefully and with good will as the Son of Man on a donkey.

172:3.6 Jesus had long tried by direct teaching to impress upon his apostles and his disciples that his kingdom was not of this world, that it was a purely spiritual matter; but he had not succeeded in this effort. Now, what he had failed to do by plain and personal teaching, he would attempt to accomplish by a symbolic appeal. Accordingly, right after the noon lunch, Jesus called Peter and John, and after directing them to go over to Bethphage, a neighboring village a little off the main road and a short distance northwest of Bethany, he further said: "Go to Bethphage, and when you come to the junction of the roads, you will find the colt of an ass tied there. Loose the colt and bring it back with you. If anyone asks you why you do this, merely say, `The Master has need of him.'" And when the two apostles had gone into Bethphage as the Master had directed, they found the colt tied near his mother in the open street and close to a house on the corner. As Peter began to untie the colt, the owner came over and asked why they did this, and when Peter answered him as Jesus had directed, the man said: "If your Master is Jesus from Galilee, let him have the colt." And so they returned bringing the colt with them.