Jesus Holds A most Important Conference With The Six 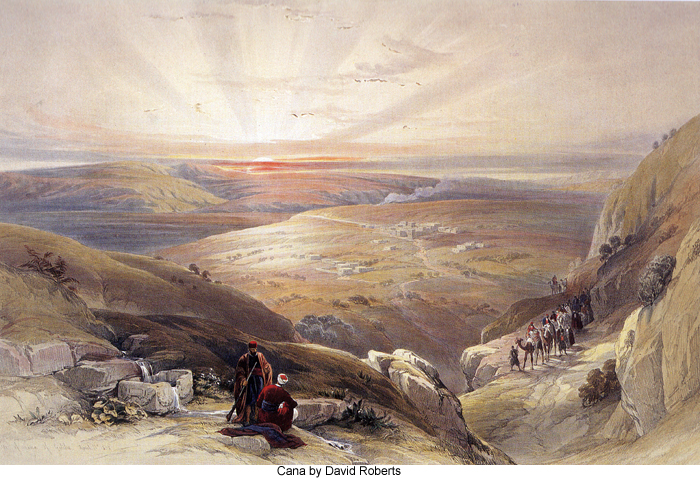 137:5.1 Though many of the guests remained for the full week of wedding festivities, Jesus, with his newly chosen disciple-apostles—James, John, Andrew, Peter, Philip, and Nathaniel —departed very early the next morning for Capernaum, going away without taking leave of anyone. Jesus' family and all his friends in Cana were much distressed because he so suddenly left them, and Jude, Jesus' youngest brother, set out in search of him. Jesus and his apostles went directly to the home of Zebedee at Bethsaida. On this journey Jesus talked over many things of importance to the coming kingdom with his newly chosen associates and especially warned them to make no mention of the turning of the water into wine. He also advised them to avoid the cities of Sepphoris and Tiberias in their future work.

137:5.2 After supper that evening, in this home of Zebedee and Salome, there was held one of the most important conferences of all Jesus' earthly career. Only the six apostles were present at this meeting; Jude arrived as they were about to separate. These six chosen men had journeyed from Cana to Bethsaida with Jesus, walking, as it were, on air. They were alive with expectancy and thrilled with the thought of having been selected as close associates of the Son of Man. But when Jesus set out to make clear to them who he was and what was to be his mission on earth and how it might possibly end, they were stunned. They could not grasp what he was telling them. They were speechless; even Peter was crushed beyond expression. Only the deep-thinking Andrew dared to make reply to Jesus' words of counsel. When Jesus perceived that they did not comprehend his message, when he saw that their ideas of the Jewish Messiah were so completely crystallized, he sent them to their rest while he walked and talked with his brother Jude. And before Jude took leave of Jesus, he said with much feeling: "My father-brother, I never have understood you. I do not know of a certainty whether you are what my mother has taught us, and I do not fully comprehend the coming kingdom, but I do know you are a mighty man of God. I heard the voice at the Jordan, and I am a believer in you, no matter who you are." And when he had spoken, he departed, going to his own home at Magdala.

137:5.3 That night Jesus did not sleep. Donning his evening wraps, he sat out on the lake shore thinking, thinking until the dawn of the next day. In the long hours of that night of meditation Jesus came clearly to comprehend that he never would be able to make his followers see him in any other light than as the long-expected Messiah. At last he recognized that there was no way to launch his message of the kingdom except as the fulfillment of John's prediction and as the one for whom the Jews were looking. After all, though he was not the Davidic type of Messiah, he was truly the fulfillment of the prophetic utterances of the more spiritually minded of the olden seers. Never again did he wholly deny that he was the Messiah. He decided to leave the final untangling of this complicated situation to the outworking of the Father's will.

137:5.4 The next morning Jesus joined his friends at breakfast, but they were a cheerless group. He visited with them and at the end of the meal gathered them about him, saying: "It is my Father's will that we tarry hereabouts for a season. You have heard John say that he came to prepare the way for the kingdom; therefore it behooves us to await the completion of John's preaching. When the forerunner of the Son of Man shall have finished his work, we will begin the proclamation of the good tidings of the kingdom." He directed his apostles to return to their nets while he made ready to go with Zebedee to the boatshop, promising to see them the next day at the synagogue, where he was to speak, and appointing a conference with them that Sabbath afternoon.