Jesus' Last Words Of Comfort To The Apostles 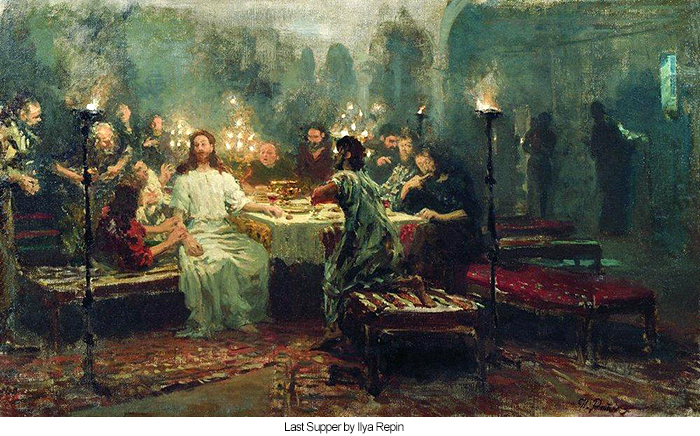 AFTER THE CONCLUSION of the farewell discourse to the eleven, Jesus visited informally with them and recounted many experiences which concerned them as a group and as individuals. At last it was beginning to dawn upon these Galileans that their friend and teacher was going to leave them, and their hope grasped at the promise that, after a little while, he would again be with them, but they were prone to forget that this return visit was also for a little while. Many of the apostles and the leading disciples really thought that this promise to return for a short season (the short interval between the resurrection and the ascension) indicated that Jesus was just going away for a brief visit with his Father, after which he would return to establish the kingdom. And such an interpretation of his teaching conformed both with their preconceived beliefs and with their ardent hopes. Since their lifelong beliefs and hopes of wish fulfillment were thus agreed, it was not difficult for them to find an interpretation of the Master's words which would justify their intense longings.

181:0.2 After the farewell discourse had been discussed and had begun to settle down in their minds, Jesus again called the apostles to order and began the impartation of his final admonitions and warnings.

181:1.1 When the eleven had taken their seats, Jesus stood and addressed them: "As long as I am with you in the flesh, I can be but one individual in your midst or in the entire world. But when I have been delivered from this investment of mortal nature, I will be able to return as a spirit indweller of each of you and of all other believers in this gospel of the kingdom. In this way the Son of Man will become a spiritual incarnation in the souls of all true believers.

181:1.2 "When I have returned to live in you and work through you, I can the better lead you on through this life and guide you through the many abodes in the future life in the heaven of heavens. Life in the Father's eternal creation is not an endless rest of idleness and selfish ease but rather a ceaseless progression in grace, truth, and glory. Each of the many, many stations in my Father's house is a stopping place, a life designed to prepare you for the next one ahead. And so will the children of light go on from glory to glory until they attain the divine estate wherein they are spiritually perfected even as the Father is perfect in all things.

181:1.3 "If you would follow after me when I leave you, put forth your earnest efforts to live in accordance with the spirit of my teachings and with the ideal of my life—the doing of my Father's will. This do instead of trying to imitate my natural life in the flesh as I have, perforce, been required to live it on this world.

181:1.4 "The Father sent me into this world, but only a few of you have chosen fully to receive me. I will pour out my spirit upon all flesh, but all men will not choose to receive this new teacher as the guide and counselor of the soul. But as many as do receive him shall be enlightened, cleansed, and comforted. And this Spirit of Truth will become in them a well of living water springing up into eternal life.

181:1.5 "And now, as I am about to leave you, I would speak words of comfort. Peace I leave with you; my peace I give to you. I make these gifts not as the world gives—by measure—I give each of you all you will receive. Let not your heart be troubled, neither let it be fearful. I have overcome the world, and in me you shall all triumph through faith. I have warned you that the Son of Man will be killed, but I assure you I will come back before I go to the Father, even though it be for only a little while. And after I have ascended to the Father, I will surely send the new teacher to be with you and to abide in your very hearts. And when you see all this come to pass, be not dismayed, but rather believe, inasmuch as you knew it all beforehand. I have loved you with a great affection, and I would not leave you, but it is the Father's will. My hour has come.

181:1.6 "Doubt not any of these truths even after you are scattered abroad by persecution and are downcast by many sorrows. When you feel that you are alone in the world, I will know of your isolation even as, when you are scattered every man to his own place, leaving the Son of Man in the hands of his enemies, you will know of mine. But I am never alone; always is the Father with me. Even at such a time I will pray for you. And all of these things have I told you that you might have peace and have it more abundantly. In this world you will have tribulation, but be of good cheer; I have triumphed in the world and shown you the way to eternal joy and everlasting service."

181:1.7 Jesus gives peace to his fellow doers of the will of God but not on the order of the joys and satisfactions of this material world. Unbelieving materialists and fatalists can hope to enjoy only two kinds of peace and soul comfort: Either they must be stoics, with steadfast resolution determined to face the inevitable and to endure the worst; or they must be optimists, ever indulging that hope which springs eternal in the human breast, vainly longing for a peace which never really comes.

181:1.8 A certain amount of both stoicism and optimism are serviceable in living a life on earth, but neither has aught to do with that superb peace which the Son of God bestows upon his brethren in the flesh. The peace which Michael gives his children on earth is that very peace which filled his own soul when he himself lived the mortal life in the flesh and on this very world. The peace of Jesus is the joy and satisfaction of a God-knowing individual who has achieved the triumph of learning fully how to do the will of God while living the mortal life in the flesh. The peace of Jesus' mind was founded on an absolute human faith in the actuality of the divine Father's wise and sympathetic overcare. Jesus had trouble on earth, he has even been falsely called the "man of sorrows," but in and through all of these experiences he enjoyed the comfort of that confidence which ever empowered him to proceed with his life purpose in the full assurance that he was achieving the Father's will.

181:1.9 Jesus was determined, persistent, and thoroughly devoted to the accomplishment of his mission, but he was not an unfeeling and calloused stoic; he ever sought for the cheerful aspects of his life experiences, but he was not a blind and self-deceived optimist. The Master knew all that was to befall him, and he was unafraid. After he had bestowed this peace upon each of his followers, he could consistently say, "Let not your heart be troubled, neither let it be afraid."

181:1.10 The peace of Jesus is, then, the peace and assurance of a son who fully believes that his career for time and eternity is safely and wholly in the care and keeping of an all-wise, all-loving, and all-powerful spirit Father. And this is, indeed, a peace which passes the understanding of mortal mind, but which can be enjoyed to the full by the believing human heart.