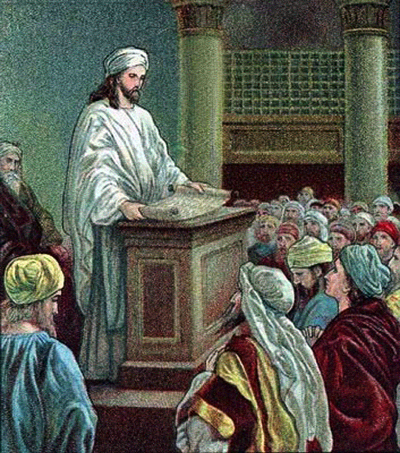 137:8.1 On Sabbath, June 22, shortly before they went out on their first preaching tour and about ten days after John's imprisonment, Jesus occupied the synagogue pulpit for the second time since bringing his apostles to Capernaum.

137:8.2 A few days before the preaching of this sermon on "The Kingdom," as Jesus was at work in the boatshop, Peter brought him the news of John's arrest. Jesus laid down his tools once more, removed his apron, and said to Peter: "The Father's hour has come. Let us make ready to proclaim the gospel of the kingdom."

137:8.3 Jesus did his last work at the carpenter bench on this Tuesday, June 18, A.D. 26. Peter rushed out of the shop and by midafternoon had rounded up all of his associates, and leaving them in a grove by the shore, he went in quest of Jesus. But he could not find him, for the Master had gone to a different grove to pray. And they did not see him until late that evening when he returned to Zebedee's house and asked for food. The next day he sent his brother James to ask for the privilege of speaking in the synagogue the coming Sabbath day. And the ruler of the synagogue was much pleased that Jesus was again willing to conduct the service.

137:8.4 Before Jesus preached this memorable sermon on the kingdom of God, the first pretentious effort of his public career, he read from the Scriptures these passages: "You shall be to me a kingdom of priests, a holy people. Yahweh is our judge, Yahweh is our lawgiver, Yahweh is our king; he will save us. Yahweh is my king and my God. He is a great king over all the earth. Loving- kindness is upon Israel in this kingdom. Blessed be the glory of the Lord for he is our King."

137:8.6 "I have come to proclaim the establishment of the Father's kingdom. And this kingdom shall include the worshiping souls of Jew and gentile, rich and poor, free and bond, for my Father is no respecter of persons; his love and his mercy are over all.

137:8.7 "The Father in heaven sends his spirit to indwell the minds of men, and when I shall have finished my work on earth, likewise shall the Spirit of Truth be poured out upon all flesh. And the spirit of my Father and the Spirit of Truth shall establish you in the coming kingdom of spiritual understanding and divine righteousness. My kingdom is not of this world. The Son of Man will not lead forth armies in battle for the establishment of a throne of power or a kingdom of worldly glory. When my kingdom shall have come, you shall know the Son of Man as the Prince of Peace, the revelation of the everlasting Father. The children of this world fight for the establishment and enlargement of the kingdoms of this world, but my disciples shall enter the kingdom of heaven by their moral decisions and by their spirit victories; and when they once enter therein, they shall find joy, righteousness, and eternal life.

137:8.8 "Those who first seek to enter the kingdom, thus beginning to strive for a nobility of character like that of my Father, shall presently possess all else that is needful. But I say to you in all sincerity: Unless you seek entrance into the kingdom with the faith and trusting dependence of a little child, you shall in no wise gain admission.

137:8.10 "John did indeed baptize you in token of repentance and for the remission of your sins, but when you enter the heavenly kingdom, you will be baptized with the Holy Spirit.

137:8.11 "In my Father's kingdom there shall be neither Jew nor gentile, only those who seek perfection through service, for I declare that he who would be great in my Father's kingdom must first become server of all. If you are willing to serve your fellows, you shall sit down with me in my kingdom, even as, by serving in the similitude of the creature, I shall presently sit down with my Father in his kingdom.

137:8.12 "This new kingdom is like a seed growing in the good soil of a field. It does not attain full fruit quickly. There is an interval of time between the establishment of the kingdom in the soul of man and that hour when the kingdom ripens into the full fruit of everlasting righteousness and eternal salvation.

0 137:8.13 "And this kingdom which I declare to you is not a reign of power and plenty. The kingdom of heaven is not a matter of meat and drink but rather a life of progressive righteousness and increasing joy in the perfecting service of my Father who is in heaven. For has not the Father said of his children of the world, 'It is my will that they should eventually be perfect, even as I am perfect.'

137:8.14 "I have come to preach the glad tidings of the kingdom. I have not come to add to the heavy burdens of those who would enter this kingdom. I proclaim the new and better way, and those who are able to enter the coming kingdom shall enjoy the divine rest. And whatever it shall cost you in the things of the world, no matter what price you may pay to enter the kingdom of heaven, you shall receive manyfold more of joy and spiritual progress in this world, and in the age to come eternal life.

137:8.15 "Entrance into the Father's kingdom waits not upon marching armies, upon overturned kingdoms of this world, nor upon the breaking of captive yokes. The kingdom of heaven is at hand, and all who enter therein shall find abundant liberty and joyous salvation.

137:8.16 "This kingdom is an everlasting dominion. Those who enter the kingdom shall ascend to my Father; they will certainly attain the right hand of his glory in Paradise. And all who enter the kingdom of heaven shall become the sons of God, and in the age to come so shall they ascend to the Father. And I have not come to call the would-be righteous but sinners and all who hunger and thirst for the righteousness of divine perfection.

137:8.17 "John came preaching repentance to prepare you for the kingdom; now have I come proclaiming faith, the gift of God, as the price of entrance into the kingdom of heaven. If you would but believe that my Father loves you with an infinite love, then you are in the kingdom of God."

137:8.18 When he had thus spoken, he sat down. All who heard him were astonished at his words. His disciples marveled. But the people were not prepared to receive the good news from the lips of this God-man. About one third who heard him believed the message even though they could not fully comprehend it; about one third prepared in their hearts to reject such a purely spiritual concept of the expected kingdom, while the remaining one third could not grasp his teaching, many truly believing that he "was beside himself."