A Boy With Seizures 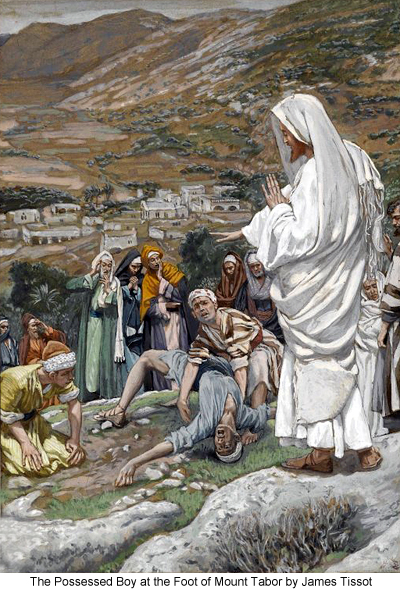 158:5.1 As Jesus drew near, the nine apostles were more than relieved to welcome him, and they were greatly encouraged to behold the good cheer and unusual enthusiasm which marked the countenances of Peter, James, and John. They all rushed forward to greet Jesus and their three brethren. As they exchanged greetings, the crowd came up, and Jesus asked, "What were you disputing about as we drew near?" But before the disconcerted and humiliated apostles could reply to the Master's question, the anxious father of the afflicted lad stepped forward and, kneeling at Jesus' feet, said: "Master, I have a son, an only child, who is possessed by an evil spirit. Not only does he cry out in terror, foam at the mouth, and fall like a dead person at the time of seizure, but oftentimes this evil spirit which possesses him rends him in convulsions and sometimes has cast him into the water and even into the fire. With much grinding of teeth and as a result of many bruises, my child wastes away. His life is worse than death; his mother and I are of a sad heart and a broken spirit. About noon yesterday, seeking for you, I caught up with your disciples, and while we were waiting, your apostles sought to cast out this demon, but they could not do it. And now, Master, will you do this for us, will you heal my son?"

158:5.2 When Jesus had listened to this recital, he touched the kneeling father and bade him rise while he gave the near-by apostles a searching survey. Then said Jesus to all those who stood before him: "O faithless and perverse generation, how long shall I bear with you? How long shall I be with you? How long ere you learn that the works of faith come not forth at the bidding of doubting unbelief?" And then, pointing to the bewildered father, Jesus said, "Bring hither your son." And when James had brought the lad before Jesus, he asked, "How long has the boy been afflicted in this way?" The father answered, "Since he was a very young child." And as they talked, the youth was seized with a violent attack and fell in their midst, gnashing his teeth and foaming at the mouth. After a succession of violent convulsions he lay there before them as one dead. Now did the father again kneel at Jesus' feet while he implored the Master, saying: "If you can cure him, I beseech you to have compassion on us and deliver us from this affliction." And when Jesus heard these words, he looked down into the father's anxious face, saying: "Question not my Father's power of love, only the sincerity and reach of your faith. All things are possible to him who really believes." And then James of Safed spoke those long-to-be-remembered words of commingled faith and doubt, "Lord, I believe. I pray you help my unbelief."

158:5.3 When Jesus heard these words, he stepped forward and, taking the lad by the hand, said: "I will do this in accordance with my Father's will and in honor of living faith. My son, arise! Come out of him, disobedient spirit, and go not back into him." And placing the hand of the lad in the hand of the father, Jesus said: "Go your way. The Father has granted the desire of your soul. " And all who were present, even the enemies of Jesus, were astonished at what they saw.

158:5.5 This was a true healing of a double affliction, a physical ailment and a spirit malady. And the lad was permanently cured from that hour. When James had departed with his restored son, Jesus said: "We go now to Caesarea Philippi make ready at once." And they were a quiet group as they journeyed southward while the crowd followed on behind.