Jesus' Final Appearance - Farewell At The Mount Of Olives (19th) 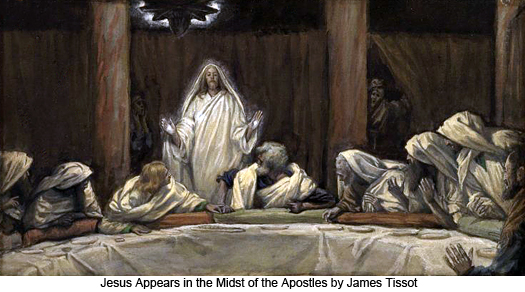 193:3.1 Early Thursday morning, May 18, Jesus made his last appearance on earth as a morontia personality. As the eleven apostles were about to sit down to breakfast in the upper chamber of Mary Mark's home, Jesus appeared to them and said:

193:3.2 " Peace be upon you. I have asked you to tarry here in Jerusalem until I ascend to the Father, even until I send you the Spirit of Truth, who shall soon be poured out upon all flesh, and who shall endow you with power from on high." Simon Zelotes interrupted Jesus, asking, "Then, Master, will you restore the kingdom, and will we see the glory of God manifested on earth?" When Jesus had listened to Simon's question, he answered: "Simon, you still cling to your old ideas about the Jewish Messiah and the material kingdom. But you will receive spiritual power after the spirit has descended upon you, and you will presently go into all the world preaching this gospel of the kingdom. As the Father sent me into the world, so do I send you. And I wish that you would love and trust one another. Judas is no more with you because his love grew cold, and because he refused to trust you, his loyal brethren. Have you not read in the Scripture where it is written: `It is not good for man to be alone. No man lives to himself'? And also where it says: `He who would have friends must show himself friendly'? And did I not even send you out to teach, two and two, that you might not become lonely and fall into the mischief and miseries of isolation? You also well know that, when I was in the flesh, I did not permit myself to be alone for long periods. From the very beginning of our associations I always had two or three of you constantly by my side or else very near at hand even when I communed with the Father. Trust, therefore, and confide in one another. And this is all the more needful since I am this day going to leave you alone in the world. The hour has come; I am about to go to the Father."

193:3.3 When he had spoken, he beckoned for them to come with him, and he led them out on the Mount of Olives, where he bade them farewell preparatory to departing from Urantia. This was a solemn journey to Olivet. Not a word was spoken by any of them from the time they left the upper chamber until Jesus paused with them on the Mount of Olives.