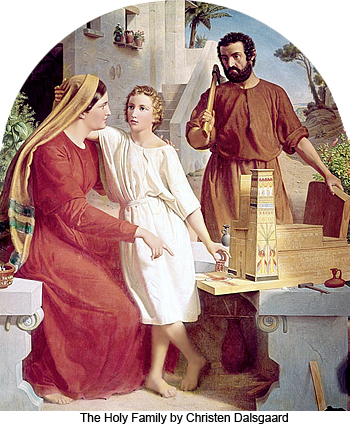 124:5.1 In this year the lad of Nazareth passed from boyhood to the beginning of young manhood; his voice began to change, and other features of mind and body gave evidence of the oncoming status of manhood.

124:5.3 It was about the middle of February that Jesus became humanly assured that he was destined to perform a mission on earth for the enlightenment of man and the revelation of God. Momentous decisions, coupled with far-reaching plans, were formulating in the mind of this youth, who was, to outward appearances, an average Jewish lad of Nazareth. The intelligent life of all Nebadon looked on with fascination and amazement as all this began to unfold in the thinking and acting of the now adolescent carpenter's son.

124:6.15 On the day before the Passover Sabbath, flood tides of spiritual illumination swept through the mortal mind of Jesus and filled his human heart to overflowing with affectionate pity for the spiritually blind and morally ignorant multitudes assembled for the celebration of the ancient Passover commemoration. This was one of the most extraordinary days that the Son of God spent in the flesh; and during the night, for the first time in his earth career, there appeared to him an assigned messenger from Salvington, commissioned by Immanuel, who said: "The hour has come. It is time that you began to be about your Father's business."

124:6.16 And so, even ere the heavy responsibilities of the Nazareth family descended upon his youthful shoulders, there now arrived the celestial messenger to remind this lad, not quite thirteen years of age, that the hour had come to begin the resumption of the responsibilities of a universe. This was the first act of a long succession of events which finally culminated in the completion of the Son's bestowal on Urantia and the replacing of "the government of a universe on his human-divine shoulders."

124:6.17 As time passed, the mystery of the incarnation became, to all of us, more and more unfathomable. We could hardly comprehend that this lad of Nazareth was the creator of all Nebadon. Neither do we nowadays understand how the spirit of this same Creator Son and the spirit of his Paradise Father are associated with the souls of mankind. With the passing of time, we could see that his human mind was increasingly discerning that, while he lived his life in the flesh, in spirit on his shoulders rested the responsibility of a universe.

124:6.18 Thus ends the career of the Nazareth lad, and begins the narrative of that adolescent youth— the increasingly self-conscious divine human—who now begins the contemplation of his world career as he strives to integrate his expanding life purpose with the desires of his parents and his obligations to his family and the society of his day and age.