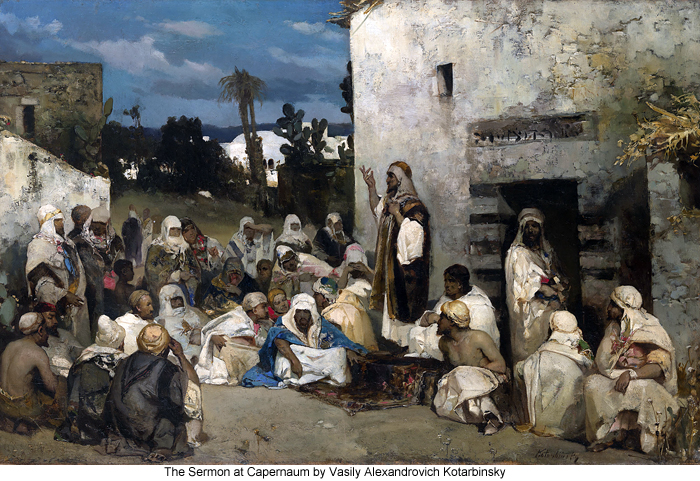 153:2.1 Jesus introduced this sermon by reading from the law as found in Deuteronomy: "But it shall come to pass, if this people will not hearken to the voice of God, that the curses of transgression shall surely overtake them. The Lord shall cause you to be smitten by your enemies; you shall be removed into all the kingdoms of the earth. And the Lord shall bring you and the king you have set up over you into the hands of a strange nation. You shall become an astonishment, a proverb, and a byword among all nations. Your sons and your daughters shall go into captivity. The strangers among you shall rise high in authority while you are brought very low. And these things shall be upon you and your seed forever because you would not hearken to the word of the Lord. Therefore shall you serve your enemies who shall come against you. You shall endure hunger and thirst and wear this alien yoke of iron. The Lord shall bring against you a nation from afar, from the end of the earth, a nation whose tongue you shall not understand, a nation of fierce countenance, a nation which will have little regard for you. And they shall besiege you in all your towns until the high fortified walls wherein you have trusted come down; and all the land shall fall into their hands. And it shall come to pass that you will be driven to eat the fruit of your own bodies, the flesh of your sons and daughters, during this time of siege, because of the straitness wherewith your enemies shall press you."

153:2.2 And when Jesus had finished this reading, he turned to the Prophets and read from Jeremiah: "`If you will not hearken to the words of my servants the prophets whom I have sent you, then will I make this house like Shiloh, and I will make this city a curse to all the nations of the earth.' And the priests and the teachers heard Jeremiah speak these words in the house of the Lord. And it came to pass that, when Jeremiah had made an end of speaking all that the Lord had commanded him to speak to all the people, the priests and teachers laid hold of him, saying, `You shall surely die.' And all the people crowded around Jeremiah in the house of the Lord. And when the princes of Judah heard these things, they sat in judgment on Jeremiah. Then spoke the priests and the teachers to the princes and to all the people, saying: `This man is worthy to die, for he has prophesied against our city, and you have heard him with your own ears.' Then spoke Jeremiah to all the princes and to all the people: `The Lord sent me to prophesy against this house and against this city all the words which you have heard. Now, therefore, amend your ways and reform your doings and obey the voice of the Lord your God that you may escape the evil which has been pronounced against you. As for me, behold I am in your hands. Do with me as seems good and right in your eyes. But know you for certain that, if you put me to death, you shall bring innocent blood upon yourselves and upon this people, for of a truth the Lord has sent me to speak all these words in your ears.'

153:2.3 "The priests and teachers of that day sought to kill Jeremiah, but the judges would not consent, albeit, for his words of warning, they did let him down by cords in a filthy dungeon until he sank in mire up to his armpits. That is what this people did to the Prophet Jeremiah when he obeyed the Lord's command to warn his brethren of their impending political downfall. Today, I desire to ask you: What will the chief priests and religious leaders of this people do with the man who dares to warn them of the day of their spiritual doom? Will you also seek to put to death the teacher who dares to proclaim the word of the Lord, and who fears not to point out wherein you refuse to walk in the way of light which leads to the entrance to the kingdom of heaven?

153:2.4 "What is it you seek as evidence of my mission on earth? We have left you undisturbed in your positions of influence and power while we preached glad tidings to the poor and the outcast. We have made no hostile attack upon that which you hold in reverence but have rather proclaimed new liberty for man's fear-ridden soul. I came into the world to reveal my Father and to establish on earth the spiritual brotherhood of the sons of God, the kingdom of heaven. And notwithstanding that I have so many times reminded you that my kingdom is not of this world, still has my Father granted you many manifestations of material wonders in addition to more evidential spiritual transformations and regenerations.

153:2.5 "What new sign is it that you seek at my hands? I declare that you already have sufficient evidence to enable you to make your decision. Verily, verily, I say to many who sit before me this day, you are confronted with the necessity of choosing which way you will go; and I say to you, as Joshua said to your forefathers, `choose you this day whom you will serve.' Today, many of you stand at the parting of the ways.

153:2.6 "Some of you, when you could not find me after the feasting of the multitude on the other side, hired the Tiberias fishing fleet, which a week before had taken shelter near by during a storm, to go in pursuit of me, and what for? Not for truth and righteousness or that you might the better know how to serve and minister to your fellow men! No, but rather that you might have more bread for which you had not labored. It was not to fill your souls with the word of life, but only that you might fill the belly with the bread of ease. And long have you been taught that the Messiah, when he should come, would work those wonders which would make life pleasant and easy for all the chosen people. It is not strange, then, that you who have been thus taught should long for the loaves and the fishes. But I declare to you that such is not the mission of the Son of Man. I have come to proclaim spiritual liberty, teach eternal truth, and foster living faith.

153:2.7 "My brethren, hanker not after the meat which perishes but rather seek for the spiritual food that nourishes even to eternal life; and this is the bread of life which the Son gives to all who will take it and eat, for the Father has given the Son this life without measure. And when you asked me, `What must we do to perform the works of God?' I plainly told you: `This is the work of God, that you believe him whom he has sent.'"

153:2.8 And then said Jesus, pointing up to the device of a pot of manna which decorated the lintel of this new synagogue, and which was embellished with grape clusters: "You have thought that your forefathers in the wilderness ate manna—the bread of heaven—but I say to you that this was the bread of earth. While Moses did not give your fathers bread from heaven, my Father now stands ready to give you the true bread of life. The bread of heaven is that which comes down from God and gives eternal life to the men of the world. And when you say to me, Give us this living bread, I will answer: I am this bread of life. He who comes to me shall not hunger, while he who believes me shall never thirst. You have seen me, lived with me, and beheld my works, yet you believe not that I came forth from the Father. But to those who do believe—fear not. All those led of the Father shall come to me, and he who comes to me shall in nowise be cast out.

153:2.9 "And now let me declare to you, once and for all time, that I have come down upon the earth, not to do my own will, but the will of Him who sent me. And this is the final will of Him who sent me, that of all those he has given me I should not lose one. And this is the will of the Father: That every one who beholds the Son and who believes him shall have eternal life. Only yesterday did I feed you with bread for your bodies; today I offer you the bread of life for your hungry souls. Will you now take the bread of the spirit as you then so willingly ate the bread of this world?"

153:2.10 As Jesus paused for a moment to look over the congregation, one of the teachers from Jerusalem (a member of the Sanhedrin) rose up and asked: "Do I understand you to say that you are the bread which comes down from heaven, and that the manna which Moses gave to our fathers in the wilderness did not?" And Jesus answered the Pharisee, "You understood aright." Then said the Pharisee: "But are you not Jesus of Nazareth, the son of Joseph, the carpenter? Are not your father and mother, as well as your brothers and sisters, well known to many of us? How then is it that you appear here in God's house and declare that you have come down from heaven?"

153:2.11 By this time there was much murmuring in the synagogue, and such a tumult was threatened that Jesus stood up and said: "Let us be patient; the truth never suffers from honest examination. I am all that you say but more. The Father and I are one; the Son does only that which the Father teaches him, while all those who are given to the Son by the Father, the Son will receive to himself. You have read where it is written in the Prophets, `You shall all be taught by God,' and that `Those whom the Father teaches will hear also his Son.' Every one who yields to the teaching of the Father's indwelling spirit will eventually come to me. Not that any man has seen the Father, but the Father's spirit does live within man. And the Son who came down from heaven, he has surely seen the Father. And those who truly believe this Son already have eternal life.

153:2.12 "I am this bread of life. Your fathers ate manna in the wilderness and are dead. But this bread which comes down from God, if a man eats thereof, he shall never die in spirit. I repeat, I am this living bread, and every soul who attains the realization of this united nature of God and man shall live forever. And this bread of life which I give to all who will receive is my own living and combined nature. The Father in the Son and the Son one with the Father—that is my life-giving revelation to the world and my saving gift to all nations."

153:2.13 When Jesus had finished speaking, the ruler of the synagogue dismissed the congregation, but they would not depart. They crowded up around Jesus to ask more questions while others murmured and disputed among themselves. And this state of affairs continued for more than three hours. It was well past seven o'clock before the audience finally dispersed.