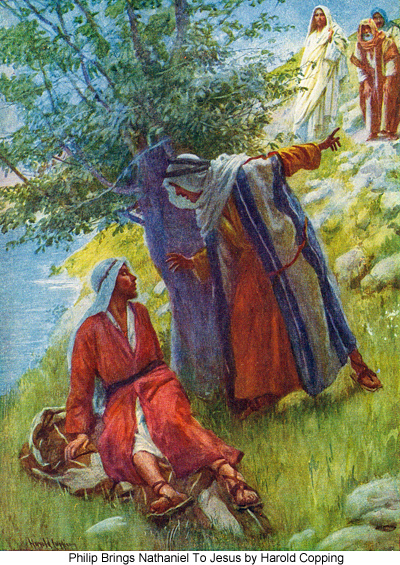 137:2.2 That day, as Jesus and his four disciple-apostles departed for Galilee, there was a great tumult in the camp of John's followers. The first great division was about to take place. The day before, John had made his positive pronouncement to Andrew and Ezra that Jesus was the Deliverer. Andrew decided to follow Jesus, but Ezra rejected the mild-mannered carpenter of Nazareth, proclaiming to his associates: "The Prophet Daniel declares that the Son of Man will come with the clouds of heaven, in power and great glory. This Galilean carpenter, this Capernaum boatbuilder, cannot be the Deliverer. Can such a gift of God come out of Nazareth? This Jesus is a relative of John, and through much kindness of heart has our teacher been deceived. Let us remain aloof from this false Messiah." When John rebuked Ezra for these utterances, he drew away with many disciples and hastened south. And this group continued to baptize in John's name and eventually founded a sect of those who believed in John but refused to accept Jesus. A remnant of this group persists in Mesopotamia even to this day.

137:2.3 While this trouble was brewing among John's followers, Jesus and his four disciple-apostles were well on their way toward Galilee. Before they crossed the Jordan, to go by way of Nain to Nazareth, Jesus, looking ahead and up the road, saw one Philip of Bethsaida with a friend coming toward them. Jesus had known Philip aforetime, and he was also well known to all four of the new apostles. He was on his way with his friend Nathaniel to visit John at Pella to learn more about the reported coming of the kingdom of God, and he was delighted to greet Jesus. Philip had been an admirer of Jesus ever since he first came to Capernaum. But Nathaniel, who lived at Cana of Galilee, did not know Jesus. Philip went forward to greet his friends while Nathaniel rested under the shade of a tree by the roadside.

137:2.4 Peter took Philip to one side and proceeded to explain that they, referring to himself, Andrew, James, and John, had all become associates of Jesus in the new kingdom and strongly urged Philip to volunteer for service. Philip was in a quandary. What should he do? Here, without a moment's warning—on the roadside near the Jordan—there had come up for immediate decision the most momentous question of a lifetime. By this time he was in earnest converse with Peter, Andrew, and John while Jesus was outlining to James the trip through Galilee and on to Capernaum. Finally, Andrew suggested to Philip, "Why not ask the Teacher?"

137:2.5 It suddenly dawned on Philip that Jesus was a really great man, possibly the Messiah, and he decided to abide by Jesus' decision in this matter; and he went straight to him, asking, "Teacher, shall I go down to John or shall I join my friends who follow you?" And Jesus answered, "Follow me."Philip was thrilled with the assurance that he had found the Deliverer.

137:2.6 Philip now motioned to the group to remain where they were while he hurried back to break the news of his decision to his friend Nathaniel, who still tarried behind under the mulberry tree, turning over in his mind the many things which he had heard concerning John the Baptist, the coming kingdom, and the expected Messiah. Philip broke in upon these meditations, exclaiming, "I have found the Deliverer, him of whom Moses and the prophets wrote and whom John has proclaimed." Nathaniel, looking up, inquired, "Whence comes this teacher?" And Philip replied, "He is Jesus of Nazareth, the son of Joseph, the carpenter, more recently residing at Capernaum." And then, somewhat shocked, Nathaniel asked, "Can any such good thing come out of Nazareth?" But Philip, taking him by the arm, said, "Come and see."

137:2.7 Philip led Nathaniel to Jesus, who, looking benignly into the face of the sincere doubter, said: "Behold a genuine Israelite, in whom there is no deceit. Follow me." And Nathaniel, turning to Philip, said: "You are right. He is indeed a master of men. I will also follow, if I am worthy." And Jesus nodded to Nathaniel, again saying, "Follow me."

137:2.8 Jesus had now assembled one half of his future corps of intimate associates, five who had for some time known him and one stranger, Nathaniel. Without further delay they crossed the Jordan and, going by the village of Nain, reached Nazareth late that evening.

137:2.9 They all remained overnight with Joseph in Jesus' boyhood home. The associates of Jesus little understood why their new-found teacher was so concerned with completely destroying every vestige of his writing which remained about the home in the form of the Ten Commandments and other mottoes and sayings. But this proceeding, together with the fact that they never saw him subsequently write—except upon the dust or in the sand—made a deep impression upon their minds.