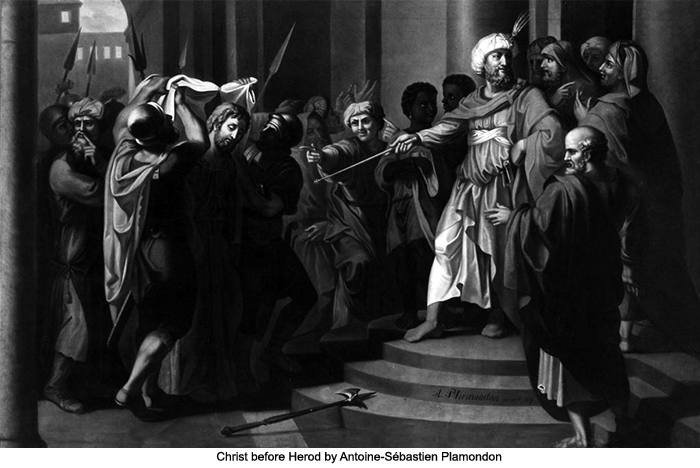 185:4.1 When Herod Antipas stopped in Jerusalem, he dwelt in the old Maccabean palace of Herod the Great, and it was to this home of the former king that Jesus was now taken by the temple guards, and he was followed by his accusers and an increasing multitude. Herod had long heard of Jesus, and he was very curious about him. When the Son of Man stood before him, on this Friday morning, the wicked Idumean never for one moment recalled the lad of former years who had appeared before him in Sepphoris pleading for a just decision regarding the money due his father, who had been accidentally killed while at work on one of the public buildings. As far as Herod knew, he had never seen Jesus, although he had worried a great deal about him when his work had been centered in Galilee. Now that he was in custody of Pilate and the Judeans, Herod was desirous of seeing him, feeling secure against any trouble from him in the future. Herod had heard much about the miracles wrought by Jesus, and he really hoped to see him do some wonder.

185:4.2 When they brought Jesus before Herod, the Tetrarch was startled by his stately appearance and the calm composure of his countenance. For some fifteen minutes Herod asked Jesus questions, but the Master would not answer. Herod taunted and dared him to perform a miracle, but Jesus would not reply to his many inquiries or respond to his taunts.

185:4.3 Then Herod turned to the chief priests and the Sadducees and, giving ear to their accusations, heard all and more than Pilate had listened to regarding the alleged evil doings of the Son of Man. Finally, being convinced that Jesus would neither talk nor perform a wonder for him, Herod, after making fun of him for a time, arrayed him in an old purple royal robe and sent him back to Pilate. Herod knew he had no jurisdiction over Jesus in Judea. Though he was glad to believe that he was finally to be rid of Jesus in Galilee, he was thankful that it was Pilate who had the responsibility of putting him to death. Herod never had fully recovered from the fear that cursed him as a result of killing John the Baptist. Herod had at certain times even feared that Jesus was John risen from the dead. Now he was relieved of that fear since he observed that Jesus was a very different sort of person from the outspoken and fiery prophet who dared to expose and denounce his private life.