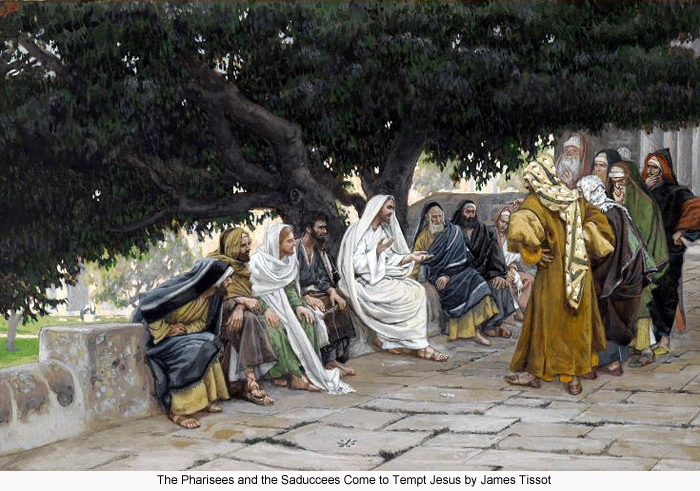 173:2.1 On Sunday the triumphal entry into Jerusalem so overawed the Jewish leaders that they refrained from placing Jesus under arrest. Today, this spectacular cleansing of the temple likewise effectively postponed the Master's apprehension. Day by day the rulers of the Jews were becoming more and more determined to destroy him, but they were distraught by two fears, which conspired to delay the hour of striking. The chief priests and the scribes were unwilling to arrest Jesus in public for fear the multitude might turn upon them in a fury of resentment; they also dreaded the possibility of the Roman guards being called upon to quell a popular uprising.

173:2.2 At the noon session of the Sanhedrin it was unanimously agreed that Jesus must be speedily destroyed, inasmuch as no friend of the Master attended this meeting. But they could not agree as to when and how he should be taken into custody. Finally they agreed upon appointing five groups to go out among the people and seek to entangle him in his teaching or otherwise to discredit him in the sight of those who listened to his instruction. Accordingly, about two o'clock, when Jesus had just begun his discourse on "The Liberty of Sonship," a group of these elders of Israel made their way up near Jesus and, interrupting him in the customary manner, asked this question: "By what authority do you do these things? Who gave you this authority?"

173:2.3 It was altogether proper that the temple rulers and the officers of the Jewish Sanhedrin should ask this question of anyone who presumed to teach and perform in the extraordinary manner which had been characteristic of Jesus, especially as concerned his recent conduct in clearing the temple of all commerce. These traders and money-changers all operated by direct license from the highest rulers, and a percentage of their gains was supposed to go directly into the temple treasury. Do not forget that authority was the watchword of all Jewry. The prophets were always stirring up trouble because they so boldly presumed to teach without authority, without having been duly instructed in the rabbinic academies and subsequently regularly ordained by the Sanhedrin. Lack of this authority in pretentious public teaching was looked upon as indicating either ignorant presumption or open rebellion. At this time only the Sanhedrin could ordain an elder or teacher, and such a ceremony had to take place in the presence of at least three persons who had previously been so ordained. Such an ordination conferred the title of "rabbi" upon the teacher and also qualified him to act as a judge, "binding and loosing such matters as might be brought to him for adjudication."

173:2.4 The rulers of the temple came before Jesus at this afternoon hour challenging not only his teaching but his acts. Jesus well knew that these very men had long publicly taught that his authority for teaching was Satanic, and that all his mighty works had been wrought by the power of the prince of devils. Therefore did the Master begin his answer to their question by asking them a counter-question. Said Jesus: "I would also like to ask you one question which, if you will answer me, I likewise will tell you by what authority I do these works. The baptism of John, whence was it? Did John get his authority from heaven or from men?"

173:2.5 And when his questioners heard this, they withdrew to one side to take counsel among themselves as to what answer they might give. They had thought to embarrass Jesus before the multitude, but now they found themselves much confused before all who were assembled at that time in the temple court. And their discomfiture was all the more apparent when they returned to Jesus, saying: "Concerning the baptism of John, we cannot answer; we do not know." And they so answered the Master because they had reasoned among themselves: If we shall say from heaven, then will he say, Why did you not believe him, and perchance will add that he received his authority from John; and if we shall say from men, then might the multitude turn upon us, for most of them hold that John was a prophet; and so they were compelled to come before Jesus and the people confessing that they, the religious teachers and leaders of Israel, could not (or would not) express an opinion about John's mission. And when they had spoken, Jesus, looking down upon them, said, "Neither will I tell you by what authority I do these things."

173:2.6 Jesus never intended to appeal to John for his authority; John had never been ordained by the Sanhedrin. Jesus' authority was in himself and in his Father's eternal supremacy.

173:2.7 In employing this method of dealing with his adversaries, Jesus did not mean to dodge the question. At first it may seem that he was guilty of a masterly evasion, but it was not so. Jesus was never disposed to take unfair advantage of even his enemies. In this apparent evasion he really supplied all his hearers with the answer to the Pharisees' question as to the authority behind his mission. They had asserted that he performed by authority of the prince of devils. Jesus had repeatedly asserted that all his teaching and works were by the power and authority of his Father in heaven. This the Jewish leaders refused to accept and were seeking to corner him into admitting that he was an irregular teacher since he had never been sanctioned by the Sanhedrin. In answering them as he did, while not claiming authority from John, he so satisfied the people with the inference that the effort of his enemies to ensnare him was effectively turned upon themselves and was much to their discredit in the eyes of all present.

173:2.8 And it was this genius of the Master for dealing with his adversaries that made them so afraid of him. They attempted no more questions that day; they retired to take further counsel among themselves. But the people were not slow to discern the dishonesty and insincerity in these questions asked by the Jewish rulers. Even the common folk could not fail to distinguish between the moral majesty of the Master and the designing hypocrisy of his enemies. But the cleansing of the temple had brought the Sadducees over to the side of the Pharisees in perfecting the plan to destroy Jesus. And the Sadducees now represented a majority of the Sanhedrin.