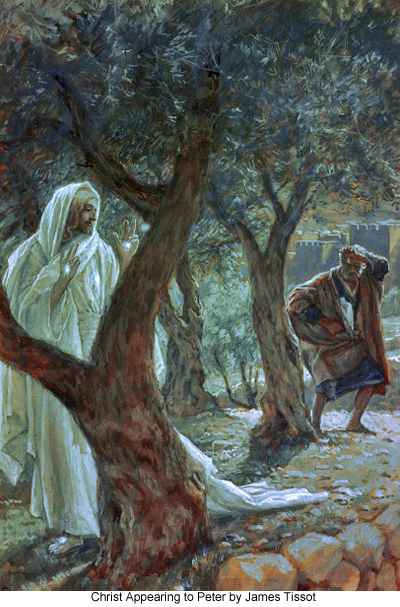 191:1.1 It was near half past eight o'clock this Sunday evening when Jesus appeared to Simon Peter in the garden of the Mark home. This was his eighth morontia manifestation. Peter had lived under a heavy burden of doubt and guilt ever since his denial of the Master. All day Saturday and this Sunday he had fought the fear that, perhaps, he was no longer an apostle. He had shuddered at the fate of Judas and even thought that he, too, had betrayed his Master. All this afternoon he thought that it might be his presence with the apostles that prevented Jesus' appearing to them, provided, of course, he had really risen from the dead. And it was to Peter, in such a frame of mind and in such a state of soul, that Jesus appeared as the dejected apostle strolled among the flowers and shrubs.

191:1.2 When Peter thought of the loving look of the Master as he passed by on Annas's porch, and as he turned over in his mind that wonderful message brought him early that morning by the women who came from the empty tomb, "Go tell my apostles—and Peter"— as he contemplated these tokens of mercy, his faith began to surmount his doubts, and he stood still, clenching his fists, while he spoke aloud: "I believe he has risen from the dead; I will go and tell my brethren." And as he said this, there suddenly appeared in front of him the form of a man, who spoke to him in familiar tones, saying: "Peter, the enemy desired to have you, but I would not give you up. I knew it was not from the heart that you disowned me; therefore I forgave you even before you asked; but now must you cease to think about yourself and the troubles of the hour while you prepare to carry the good news of the gospel to those who sit in darkness. No longer should you be concerned with what you may obtain from the kingdom but rather be exercised about what you can give to those who live in dire spiritual poverty. Gird yourself, Simon, for the battle of a new day, the struggle with spiritual darkness and the evil doubtings of the natural minds of men."

191:1.3 Peter and the morontia Jesus walked through the garden and talked of things past, present, and future for almost five minutes. Then the Master vanished from his gaze, saying, "Farewell, Peter, until I see you with your brethren."

191:1.4 For a moment, Peter was overcome by the realization that he had talked with the risen Master, and that he could be sure he was still an ambassador of the kingdom. He had just heard the glorified Master exhort him to go on preaching the gospel. And with all this welling up within his heart, he rushed to the upper chamber and into the presence of his fellow apostles, exclaiming in breathless excitement: "I have seen the Master; he was in the garden. I talked with him, and he has forgiven me."

191:1.5 Peter's declaration that he had seen Jesus in the garden made a profound impression upon his fellow apostles, and they were about ready to surrender their doubts when Andrew got up and warned them not to be too much influenced by his brother's report. Andrew intimated that Peter had seen things which were not real before. Although Andrew did not directly allude to the vision of the night on the Sea of Galilee wherein Peter claimed to have seen the Master coming to them walking on the water, he said enough to betray to all present that he had this incident in mind. Simon Peter was very much hurt by his brother's insinuations and immediately lapsed into crestfallen silence. The twins felt very sorry for Peter, and they both went over to express their sympathy and to say that they believed him and to reassert that their own mother had also seen the Master.